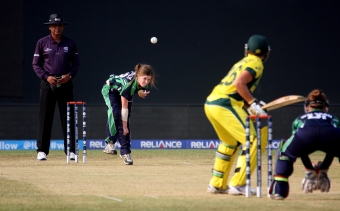 With less than a week to go until the Australian Southern Stars descend upon Dublin for a three match T20i series excitement is building within the Irish women’s camp.

The series is taking place on August 19th, 21st and 22nd and all matches will be played in YMCA CC, with free entry for all spectators.

The players feel that they are well prepared for the fixtures and admit to being both “nervous and excited” to be playing the world champions on home soil. There was special praise given to the introduction of the Super 3’s this summer as it has brought a “higher intensity” to players as it bridges the gap between club and international levels.

As well as the domestic Super 3’s matches, on an international level the team have been in action all summer in the ECB county championships and ECB T20 competition, with two recent T20 wins over Sussex and Nottinghamshire a fortnight ago.

The team will be playing a YMCA academy team tomorrow, Friday 14th August, ahead of their ECB T20 ties against Yorkshire and Middlesex this weekend as they prepare for next week.