Explosive innings from Stirling leads Knights to victory over Lightning, despite Balbirnie century 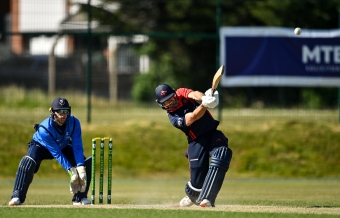 Player of the Match Stirling’s whirlwind 64 from 26 balls gave the Northern Knights the impetus to comfortably defeat the defending Cup champions. Despite the Knights total being only 71 when Stirling eventually nicked off to Josh Little, the damage was done as the Knights run chase was only 6 overs in, leaving a very achievable run rate required for victory on a pitch offering more to the batters as the day went on. Stirling’s innings featured 5 sixes and 8 fours - his destructive power on the pull shot was on display for all to see, with all of his sixes and four of his boundaries being pull shots behind square or square of the wicket.

Jeremy Lawlor (80*), who anchored the remainder of the run chase, looked at in complete control from then on. The Welsh-born top order batter ran well between the wickets, often putting pressure on the field through turning ones into twos, and his 138-run fourth wicket partnership with Luke Georgeson (58) ensured the Northern team’s successful run chase. Mark Adair also chimed in with a 25* from 23 balls at the end to finish the job.

The Lightning bowlers toiled well, but in the end could not contain the run rate as the Knights cruised to a five-wicket win.

Earlier in the day, the Knights captain Harry Tector had won the toss and opted to bowl. The home side immediately removed Lightning dangerman Kevin O’Brien with the first ball of the inning, and shortly after dismissed Jack Tector (4) to leave the Lightning in early trouble at 11-2 in the second over.

Enter Andrew Balbirnie. The Irish captain, who was featuring in his first match in Ireland after his early season stint with Glamorgan, played an almost flawless innings of 126 from 151 balls - playing shots to all parts and pacing his innings with experience and guile.

Balbirnie featured strongly in two partnerships that first stabilized the innings, and then accelerated the Lightning’s run rate so that a score of around 250 seemed achievable. He firstly shared a 54-run third-wicket stand with Lorcan Tucker (14), then followed in a 120-run partnership with George Dockrell.

While Balbirnie went about his batting in the assured manner Irish fans are familiar with, Dockrell once again impressed with the bat, scoring 58 from 83 balls, including six boundaries. He has now scored 51*, 100* and 58 in his three IP50 knocks in 2021, and is potentially batting his way into contention for the upcoming World Cup Super League series against the Netherlands in June.

Barry McCarthy played a big-hitting cameo at the end with 20* from 7 balls, and Leinster Lightning finished on 243-7 from 50 overs.

For the Knights, Georgeson bowled impressively for his 3-44 - his figures being dented by his last over where he went for 18 run – while Matthew Foster (1-34) looked lively and Ben White followed up his good performance in the last match for the Ireland Wolves with an equally impressive 1-38 from his 10 overs.

The Knights are back in action against North West Warriors at Stormont on Tuesday, while the Lightning face Munster Reds at Pembroke on Thursday.