Eye on the Sky ahead of today 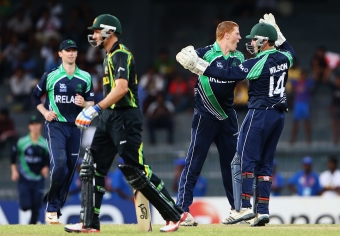 West Indies are ahead of Ireland on Net-Run Rate and that might come into play if the rain comes into play today in Colombo.

As if the very unpredictability of the format wasn’t enough, the ‘R’ factor is threatening to add to the excitement as the firstphase of the ICC World Twenty20 2012 enters its climactic stage.

End September isn’t necessarily the best time to play cricket in Sri Lanka, but for most of the first week of the competition, the weather Gods had been benign. Saturday, however, saw both matches – in Hambantota between Sri Lanka and South Africa, and in Colombo between Australia and the West Indies – being truncated due to heavy rains, and it’s more than possible that that trend could continue over the next few days.

When Ireland goes head to head against the West Indies on Monday, therefore, it will have one eye on the skies. The final Group B contest is a must-win game for William Porterfield’s side. A washout will spell instant elimination for the Irish, like the West Indies winless after losing to Australia, but well below Monday’s opponents on the net run rate.

The elements, of course, are beyond the control of mere mortals, and as much as teams talk about worrying only about the controllables, it’s impossible for Ireland not to cast anxious glances heavenwards. It hasn’t helped its cause with an abject batting display against Australia, but teams would rather lose on the field than lose out on run rate, which is why the Irish will be desperate for a game of any duration on Monday.

The West Indies, by contrast, may not fancy a reduced overs face-off of the sort Sri Lanka and South Africa were involved in on Sunday. That was a seven-over shootout, a veritable lottery if ever there is one. Darren Sammy was part-amused, part-annoyed as he was asked about a similar prospect on Monday. Once he had got over a prolonged chuckling bout and composed himself, he said, “I think the fans would like a full contest. Let’s hope we have a full Twenty20 game on Monday.”

The shorter the duration of the game, the more the gap between the teams will be bridged. Even though its bowling was taken to the cleaners by Australia on Saturday, the West Indies will approach a full game as obvious favourites, if nothing else, then purely on the back of the explosive batting riches at its disposal.

The return of Chris Gayle has lent the West Indian batting a touch of class and an aura of intimidation. Gayle’s new-found approach based around playing himself in and assessing the conditions is just the recipe for success at the Premadasa, where the new ball has jagged around and climbed disconcertingly for the first four or five overs. If he can get past that initial testing period, Ireland will have its hands full.

Saturday reiterated that there is more to the West Indian batting than Gayle, but it also proved emphatically that when Gayle is on song, the West Indies can be quite a force. Ireland will have watched that match with interest – meticulous planning and attention to minute detail have been integral to Ireland’s progress as a cricketing entity – though whether it will have taken any new information on board is another matter altogether.

One thing’s for sure – Ireland will not roll over. Ireland is nothing if not combative and feisty. It has pulled off some of the greatest upsets in ICC Cricket World Cup history, upending Pakistan in 2007 and stunning England in a high-scoring thriller in Bangalore last year. It will have the West Indies firmly in its sights, knowing that victory will not merely reaffirm its status as a limited-overs force but also catapult it to the Super Eights.

Ireland’s big test will be to come away without suffering too much damage in the Power Play overs. Against Australia, it was four down for nothing, and was always playing catch-up after that. The West Indies might not appear to possess the same firepower in bowling, but Porterfield must lead from the front if his team is to remain competitive and translate its dream of a Super Eight berth into reality.