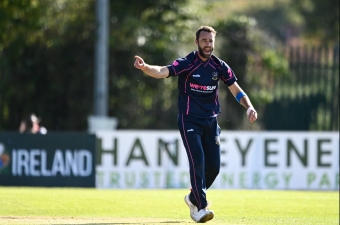 The semi-finals are as follows:

Both Phoenix (1986) and Clontarf (2013) are previous winners of the competition (Clontarf were also runners-up in 1990 and 2014), while Lisburn and CIYMS are looking to reach the final for the for the first time.

Having knocked the holders Pembroke out in the quarter-finals, CIYMS will face a very formidable Phoenix side, who have the likes of Tyrone Kane and Nick Pretorius in their ranks, along with Danish International Oliver Hald, Ben White and Adam Chester.

“We’re looking forward to taking on CIYMS this Sunday in the semi-final of this years’ Irish Senior Cup in the Phoenix Park. It’s certainly been a thrill a minute from our boys this season with close wins, close losses, thrilling bowling and fielding mixed in with some fine batting too.

“From the other side of the ‘white line’ it’s fair to say that skipper Tyrone Kane’s boys have entertained the Phoenix members this season and they are all behind TK’s boys this weekend. The team have worked so hard this season in all competitions and have been playing an attacking brand of cricket. In the recent quarter-final victory over Balbriggan that included having 5 slips and 2 gully’s against the Premier League leaders as the Phoenix bowlers went in search of wickets.

“This weekend the bowling will be led by TK and Conor Sheil, with contributions from the spin attack of Ben White, Dev Ranolia and others. On the batting front, Nic Pretorius will be hoping to continue his good form from the quarter final and along with Black and O’Byrne lay a good platform for the middle order attack of Adam Chester, Louis Mc Donagh and TK himself. It promises to be an exciting weekend in the Park.”

For CIYMS, they can call on the likes of Ross Adair, who struck a fabulous century for Northern Knights in their victory over North West Warriors in the Inter-Provincial Trophy during the week, Jason van der Merwe along with John Matchett, who also scored a century in that cup win over Pembroke, and Leinster Lightning head coach Nigel Jones.

Clontarf, who have already beaten CSNI, Merrion and Leinster on their way to the semi-finals, will travel to take on Lisburn, while the hosts have got past Malahide, Donemana and The Hills.

Nigel Jones of CIYMS spoke ahead of the game:

“Yes, we’re really excited. The last round we were down here at Pembroke. We knew that would be a tough challenge and thankfully we played some good cricket and got a good win, and I think we’ll take some confidence from that going into the game against Phoenix. The boys are really looking forward to it.

“I haven’t been lucky enough to win the Irish Senior Cup yet, and it’s something my guys would probably be sick of hearing from me. It’s the one that I’d really like us to try and get our hands on. We’ve been very fortunate, we’ve got a pretty strong squad, had that for a number of seasons now. We’ve been very lucky to have won pretty much everything else, but we haven’t won that one.

“I think it’d be huge to win it. The supporters that were down here last week watching, they’ve been really invested in it. Around the club, there’s obviously a little bit of talk. I guess that’s the one thing in terms of the team though, we’re not trying to talk about it, apart from the game that’s in front of us. It would certainly mean a lot, but it’s going to take some really good cricket, and we know that, and we’ll just take it one game at a time.2

He says that to win the Irish Senior Cup with your club would be a very special moment:

“That’s the thing isn’t it, you work hard, you play with your mates and when you build up that relationship over a period of time in games and the supporters get round you. The club, a lot of people end up living off that kind of moment whether they’re a supporter or a player, so look, we hope it will we’ll end up going our way, but we’ve a bit of work to be done on Sunday first.”

There will be a Leinster winner of the Clear Currency National Cup after Terenure, North County, Rush and cup holders Railway Union came through their respective quarter-finals.

Terenure will host Railway Union at the Terenure Sports Club. The hosts, who are flying high in the Leinster Championship, have beaten last year’s runners-up Bond’s Glen and County Galway en route to the semi-finals, while Railway Union took care of Strabane and Ballyspallen.

Fakhar Zaman was influential for Railway Union in their win over Ballyspallen, taking 4-48 with the ball and scoring 49 with the bat. Liam McCarthy took 2-27. Terenure will look to the likes of Séamus Lynch, Sadiq Safi, Henry Dall and Raghav Grover if they’re to turn over the reigning champions.

In the other semi-final Rush host North County in Kenure. North County are performing the better in the Leinster league than the hosts, however cup games offer teams the opportunity to put their league form behind them for a chance to reach a National Cup final.

Asher Abbasi (7-80) and Alex Neary (7-65) have been in superb form with the ball for Rush in this competition, while Sadaat Gull scored a century in their victory over Cregagh in the quarter-finals. North County will look to John Mooney, Abdul Ghaffar, skipper Eddie Richardson, Jamie Grassi and their overseas professional Malcolm Nofal.

The finals of the two competitions will be livestreamed at www.livestream.com/CricketIrelandLive, with the details: