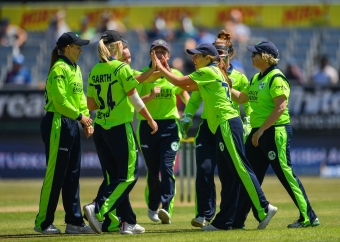 The Ireland Women's squad for the World T20 tournament has more than 1,000 caps collectively

Cricket Ireland selectors have named an experienced 15-player squad - with collectively more than 1,000 international appearances - for the upcoming ICC Women’s World T20 tournament in the Caribbean in November, with Australian-born Celeste Raack coming into the Irish set-up after declaring for Ireland.

“We have picked a strong and experienced side that we believe will be best suited for the tournament opposition and the conditions in the Caribbean. Captain Laura Delany will lead out a side which is on an upward trajectory after finishing the summer on a high and keen to impress their credentials on the world stage.”

“This is our third consecutive appearance in the World T20s and arguably this is one of the strongest squads we have selected over that time. To have a team which features Ireland’s leading run scorer, Ireland’s leading wicket taker and five players with more than 100 international appearances is a fortunate position to be in.”

“Two of the squad, Gaby Lewis and Kim Garth, were also recently featured in a Wisden Monthly magazine article on the 25 best young women’s cricketers and is not only a credit to the individual players themselves, but an indicator on how cricket in Ireland is on the rise.”

“As always, when it comes to selection matters, you are always looking to balance the immediate needs with an eye to the longer term. Performing well at the tournament itself is the first priority, but providing younger players with an experience travelling overseas and playing at major tournaments is just as important.”

“It’s a great squad, one which is both a reward for performance and an acknowledgement at how important big game experience is at international tournaments. When you’re at a world cup with the TV cameras, big crowds and big venues, it is important to ensure the younger players are surrounded by experienced heads.”

“It’s important that every player is there on their merits and every player is contributing – and for senior players it’s all about the example they set. You just have to look at Clare Shillington – she may be Ireland’s longest serving member, Ireland’s highest run scorer and recently announced she would be retiring after this tournament - but she is still showing the same commitment to her game that she always has, and it has shown on the pitch with her Player of the Tournament performances during the World T20 Qualifier.”

“I’m also delighted that selectors have looked beyond and taken the chance of bringing leg-spinner Celeste Raack into the squad. She’s Australian-born but holds an Irish passport and we are delighted to welcome her into the international set-up.”

“Celeste impressed many of us playing for the Typhoons in the Toyota Super 3’s Series this year, and has previously played for the Tasmanian Tigers women’s team in the Australian women’s domestic league, and the Hobart Hurricanes in the Women’s Big Bash League.”

Reflecting on her call-up to the squad, Celeste Raack said:

“I am very excited and honoured to have been selected for Ireland for the World Cup. I am flying in on Friday to join the squad in their preparation for the tournament and am very much looking forward to it. I am hoping that this will be the start of a long career as an Irish cricketer and intend on relocating for the start of the 2019 cricket season.”

“I played for the Typhoons in the Super 3’s competition this season. I really enjoyed the playing environment and the opportunity it provides for players to play in a competitive and challenging series. Playing with and against Irish international players in this series really improved my cricket and bowling on Irish wickets was a different challenge to those I’ve played on in Australia.”

Carrie Archer looks ahead to the tournament