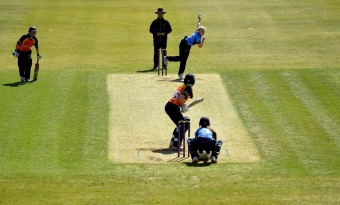 The XXXXX have won the opener at Pembroke

DUBLIN – A solid batting display led by captain and player of the match Gaby Lewis, and an impressive team bowling performance, sees the Scorchers claim the first win of the Arachas Super 50 Cup today at Pembroke Cricket Club.

Three wickets apiece to Scorchers’ Cara Murray (3-39) and Leah Paul (3-42), backed up by a good fielding performance saw the team in orange defend their total of 221-5.

The Typhoons began the run chase solidly, with Rachel Delaney (21) and Rebecca Stokell (20) putting on a 44-run opening stand. Typhoons captain Laura Delany (24) threatened to accelerate the scoring until she was dismissed stumped by a smart piece of keeping by Shauna Kavanagh.

The blues innings drifted in the middle overs until Louise Little (42) and Celeste Raack (40*) put on a well-paced 74 run partnership. Little was unfortunate not to register her maiden half-century, looking increasingly confident as her innings progressed until she skied a ball and was caught at cover by a diving Gaby Lewis.

The Scorchers bowling attack looked sharp right from the outset, Sophie MacMahon’s (1-23) opening spell kept early runs to a minimum, while Lara Maritz (0-28) brought pace and accuracy to the fore. However, potentially the most threatening pair were Ashlee King (1-36) who – after starting her afternoon’s work with two wides – found extra bounce and pace to unsettle several of the Typhoons batters, and Cara Murray who bowled her legspin with increased pace and improved accuracy, showing the benefits of her off-season working on her bowling technique.

Earlier in the day the Scorchers opening pair of Gaby Lewis and Leah Paul started strongly with a 74-run opening stand in just over 16 overs. A tight run out saw Paul depart for 16, while Lewis fell shortly after for 60, trapped in front by her opposite number Laura Delany. With the loss of Lewis the Scorchers run rate becalmed. With a rebuilding job required Shauna Kavanagh led the fightback with 48, while Sophie MacMahon (38*) and Lara Maritz (20*) put on an unbroken 42-run stand at the backend of the innings to get the Scorchers to 221-5 from their 50 overs.

For the Typhoons bowlers, Laura Delany 1-17 and Orla Prendergast 1-48 looked the most threatening, while Ava Canning went wicketless, but her 0-29 off 10 overs was instrumental in keeping the Scorchers total in check.

In the end, it was the Scorchers bowling unit that was the difference between the two sides, however, the result sets the tone for a highly competitive series.

Gaby Lewis was named Player of the Match.