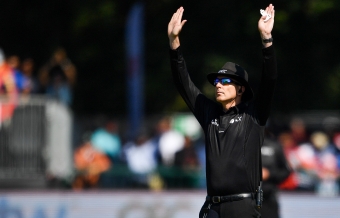 DUBLIN – Cricket Ireland has today announced the appointment of four cricket umpires to full-time season contracts as part of its restructure of its Umpire Panels, a process that also doubles the number of women umpires on the Panels.

The restructure of the Cricket Ireland Umpires Panels will see the creation of a First-Class Panel of 11 umpires (four of which have been awarded full-time season contracts and will stand in the majority of Inter-Provincial Series matches), and Representative Panel of five umpires (who will stand primarily in the remainder of the representative fixture list).

Furthermore, as part of the development of women umpires, Cricket Ireland has doubled the number of women umpires on the Umpires Panels, with Mary Waldron continuing on the First-class Panel, and Laura Caughey being appointed to the Representative Panel.

“As we grow the sport of cricket in Ireland, there has become a more pressing need to upskill and invest in the quality and expertise of our match officials. Over the last few years we have invested heavily in the playing and coaching staff of our international teams, created a new Academy and pathway system, and began to provide funding for the upgrade and improvement to grassroots and club facilities.”

“Two key drivers – full membership of the ICC and the recognition of our domestic men’s competition with first-class status – have highlighted the need to invest further not only those playing the game, but also those officiating the game. If we are to truly deliver world-class cricket in Ireland, we need to have world-class umpires.”

“Alan, Paul, Roly and Mark have been great long-term servants of the game, collectively with more than 60 years umpiring experience in Ireland and abroad. While they already represent Ireland on the International Cricket Council’s International Panel of ICC Umpires, we are delighted to be able to provide full-time season contracts for the first time throughout the summer season, and can think of no more worthy recipients than these four officials.”

Paul Reynolds, who in 2018 stood in his first T20 International, said:

“Cricket Ireland’s new support for match officials is a huge boost to officiating on the island. It means that those who are starting out in their careers now know that there is a tangible path for them to take. It also means that it is now easier for the best to officiate at the very top of the sport, rather than just those who can afford to give up their time, which could have been the way officiating developed without this support. Irish cricket will benefit as umpiring, scoring and refereeing becomes a valued part of the Cricket Ireland set-up.”

“Being a full-time umpire now gives us a great opportunity to do something that we love, at the same time as no longer having to worry about spending many weeks each year living only on expenses. And with such a great summer’s cricket ahead of us, we can now look forward to it knowing that all our time can be devoted exclusively to preparation.”

“As Irish cricket becomes ever more professional at all levels so the standards and expectations of officiating must also rise to help create the right environment for each match. The new Cricket Ireland Umpire Panel structure represents a huge step forward for officiating in Ireland and there is now a clear pathway for those with the ability and commitment to reach the top level.”

“My involvement in umpiring has often meant taking periods of unpaid leave from work - the introduction of contracts should make this less of an issue and ensure easier availability for umpires in the future.”

Roland Black, who has been umpiring since 2006, said:

“It is excellent news that Cricket Ireland have agreed to further invest in officiating, as they continue to grow and develop as a Full Member. With the increase in home international fixtures and with their inclusion in the Future Tours Programme this will allow umpires a much larger degree of support to improve and develop. Match Officials, including umpires and scorers, are the third important element to any game of cricket and this first step to making officiating more professional is a welcome boost.”

Alan Neill, who has been umpiring for 12 years locally and within Europe, said:

“This is an important step down the professional route and creates credibility amongst our fellow officials in Test-playing nations. We are now viewed “on par” with other officials, and the contractual certainty now creates a solid foundation for the opportunities which lie ahead this season.” Image: Umpire Waldron standing in a match in Australia in 2019

Mary Waldron, who recently returned from umpiring in Australia during the Irish winter, said:

“I’ve really enjoyed my time in Australia over the last few months - I’ve had some fantastic umpiring experiences and hopefully have developed my knowledge and skills further. It’s going to be a big home season of cricket in Ireland, and between umpiring and playing, I’ll be spending plenty of time in the middle this season.”

“I’m delighted that Laura has joined as the second female umpire on the Umpires Panel, and hope that we are the first of many women to be involved in top-level officiating in Ireland over coming years.”

Laura Caughey, who has been added to the Representative Panel, said:

“Gaining ICC full membership has not only helped in developing player pathways in Ireland, it is bringing about more opportunities for officials in the game too. It’s a huge honour for me to be included in the new Representative Panel. It’s a busy summer with a lot of fixtures in the diary already, but it’s a great chance to gain valuable experience at the next level with the top umpires in the country and I can’t wait to get started.”

“The inclusion of two women on the Panel is a great step forward for women’s participation at all levels in our sport too. I hope this will encourage others to take up umpiring as there are so many fantastic opportunities available. I love umpiring in the NCU and I’m really excited for this next step. Being selected for the panel has been really encouraging and I’ll be working hard all summer to keep improving.”

Funding has also been allocated for the appointment of a panel of up to six Match Referees, who will primarily be responsible for Inter-Provincial matches, Super 3s and Wolves cricket. In addition to these six, our two existing ICC-level referees will be available where possible to these matches. These will be announced in coming weeks.

Additionally, Cricket Ireland has increased match fees for all umpires, match referees and scorers from the start of the 2019 season.