First-ever series win at home against a Full Member, as Ireland go 2-0 up against Zimbabwe 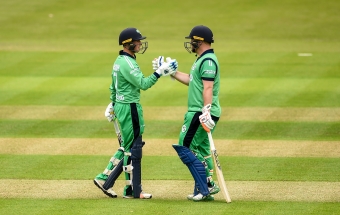 McCollum and Stirling celebrate their half-centuries

After losing the toss and being sent in to bat first on a low, green wicket, Ireland’s opening pair of Paul Stirling and James McCollum batted superbly, registering their first century-stand as a partnership and laying a solid platform for the home side.

McCollum was the first to fifty – his first international half-century – while Stirling’s half-ton came up a few balls later. For Stirling this was remarkably his sixth consecutive score over 50, and during his innings he brought up his 4,000th run in one-day internationals for Ireland. He is the first Irishman to achieve the milestone and, until his dismissal, looked in imperious form.

McCollum (73) continued batting on, looking increasingly confident – flashing boundaries over cover and gliding another through a vacant slip cordon. However, with the Irish side looking comfortable on 140-1 the Zimbabwean bowlers, led by Solomon Mire fought back. Three wickets fell for 14 runs, and the previous well-paced scoreline looked a little more precarious at 154-4.

The arrival of Lorcan Tucker saw an innings stabilising partnership with captain William Porterfield (20), but with the Irish side looking to push on the scoring rate, Porterfield fell.

From there on there was only one story – Tucker’s better than run-a-ball half-century. While wickets fell around him, threatening to leave Ireland with a score of just over 200, Tucker hit his straps. He hit seven boundaries in a innings of great maturity, steering the home side to a competitive 242-9 – only falling on the second-last ball of the innings trying to hit out.

For Zimbabwe, the recalled Solomon Mire, who missed out in Bready, took 4-43 and looked dangerous throughout, but the 2-28 from 8 overs by spinner Sikander Raza probably did more to pacify the Irish side and build pressure on the middle order to great effect.

The Irish defence with ball in hand could hardly have started any better. A wicket to Tim Murtagh (5-21) in his first over, followed by two more in his third had Zimbabwe staring down the barrel at 14-3 in the fifth over.

Craig Ervine (43) and Sean Williams consolidated the innings, until Shane Getkate removed Ervine, feathering a ball through to Tucker behind the stumps. Tucker was the most relieved man on the field, having grassed a chance off Ervine just ten balls prior.

We're back and WICKET! @tjmurtagh strikes, with Masakadza playing on. Zimbabwe 4-1 in the first over. #BackingGreen  pic.twitter.com/bwC7RV7YN9

Williams and Sikander Raza then put on 57 runs to get Zimbabwe back in the hunt, but then it was the experienced duo of Rankin and Murtagh who made key breakthroughs. Rankin first dismissed the dangerous Raza who compiled 31 off 22 balls, and then the reintroduction of the ageless Murtagh saw the end of Williams for 58.

The last 15 overs then swung dramatically, with both sides seeming to get the upper hand at times. A dangerous 69-run stand between Ryan Burl (53) and Donald Tiripano (33) threatened to take the game away from the home team, but nerves of steel by the bowlers and some excellent fielding first saw Murtagh remove Tiripano to claim his first ever five-wicket haul for Ireland, and then Burl was run out attempting a tight second run.

In the end needing 14 off the last over was too much for Zimbabwe and Mark Adair, bowling the final over, bowled several well-directed full-length deliveries that restricted the ability for the batters to swing at the ball. Zimbabwe finished on 237-9, giving Ireland the win and clinch the series 2-0 with one to play.

This win was also notable, as it was the first-ever series win by Ireland on home soil against a Full Member nation, and the first series win against any side at home since 2014.

Tim Murtagh said after the game:

“It’s massive, a series win is rare, we haven’t had many in the last 7 or 8 years. To be 2-0 up after with one to play – there are some happy people in the dressing room. We also just spoke of the determination to finish the job on Sunday and go three-nil up.”

“We always felt we’d have to bowl well to make 243 a winning score, we were a bit disappointed we hadn’t finished 260 or 270. Generally, I thought the bowling and fielding display was excellent to keep them below that, so it was nervy in the end – but that’s 50-over cricket when you score 240 to 250, it’ll often go down to the wire. It was important for us to win a close one.”

“It’s my first List A five-for, so it was nice to get that today. I spoke in the huddle about setting the tone and when I walked out I thought “Right, I’m going to have to act on those words now”. It was important to get those three wickets early, and I thought everyone chipped in.”

About Mark Adair’s final over, he said:

“That’s kind of the best final over from a youngster that I’ve seen – I’ve been in that situation lots of times and probably lost a game for whatever team I was playing for. For him to nail two or three good Yorkers and execute his plans was impressive. Hopefully, he can kick on from that and take confidence for the rest of his Irish career.”

“They’ve got a lot of good players, particularly in their upper and middle order. The sides are pretty evenly matched and hopefully, we’ll be back here for another good game on Sunday.”

The two sides will meet for the third of three ODIs on Sunday at Stormont in Belfast. Match scheduled to begin at 10.45am. Tickets available at the gate or online via Ticketmaster.