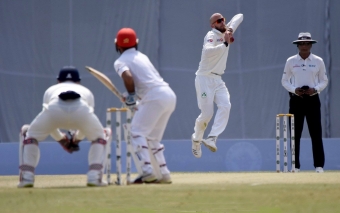 The five players to have been awarded Emerging Player Contracts in 2019 are:

In addition to the Emerging Player Contracts last year, Cricket Ireland significantly increased match fees for players in the Inter-Provincial Series and Ireland Wolves. This year the Board of Cricket Ireland has approved an increased head coach involvement, and implemented an additional round of 50 over Cup matches (to be played in La Manga Club in April), as well as a second T20 Festival.

This also comes off the back of the announcement of new part-time women’s contracts that will be announced shortly.

“The Selectors see the Emerging Player Contracts as a successfully established part of the international player pathway. The decision-making around recipients of these contracts very much takes into account the skill sets Graham Ford (Head Coach of Ireland Men’s senior team) will need over the coming years as part of a succession planning process. But succession planning is not a far off project - just take James McCollum, who was awarded an Emerging Player Contract in 2018, this investment and recognition has led to an international debut and a Test cap within 12 months.”

“Between the Senior Men’s central contracts and the Emerging Player Contracts, we believe we have a talent pool of 24 exciting players to draw on - with a spread of experience and youth, and reward for sustained performance.”

“I think all fans of Irish cricket have been delighted at how well James Cameron-Dow has made the step up – first on the Wolves tour to Sri Lanka, then with his one-day and Test performance in India. He’s certainly put his hand up and we will back him to get even better in coming years. Likewise, Shane Getkate has been on our radar for a while and we were delighted that he made his international debut in Oman. Shane is dedicated to improving his game further, and his all-round abilities were on display for all to see throughout the first few months of 2019.”

“Josh Little, Jack Tector and Lorcan Tucker equally deserve their second Emerging Player Contracts and we hope that these three players will play well in the Inter-Provincial Series and keep knocking on that door for international selection.”

“The Inter-Provincial Series is the breeding ground for future internationals, and we want to ensure that conveyor belt of talent coming through to the national team is as strong as possible.”

“This package of improvements to the domestic game are essential and raise the bar of professionalism and standards within our sport.”

“The Emerging Player Contracts though are crucial to our future success on the field. Having the players spend more time under the guidance and expertise of our high-performance provincial union head coaches and Cricket Ireland coaches and support staff is critical. We have a talented backroom staff, so contracts enable us to dedicate more time and resources into what are some of our most promising young talent.”

“There is no secret that we also offered Nathan Smith a contract, however, he has elected to move back to Australia full-time. As such, the Selectors have the potential to offer a sixth contract in coming months and will be closely monitoring the performances of players in the early stages of the 2019 season.”

The first round of the 2019 Inter-Provincial Series starts on Monday 22 April, when Leinster Lightning take on North West Warriors in a 50-over encounter in La Manga Club, Spain. Full fixture list for the season here.