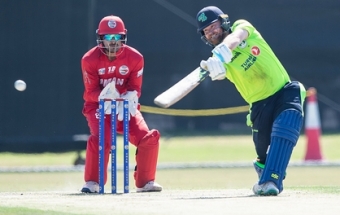 Paul Stirling in action against Oman earlier in 2019

DUBLIN – Ireland Men’s cricket team will participate in a five-nation T20 series in Oman in the immediate lead-up to the ICC T20 World Cup Qualifier – pitting the side against three other nations also aiming for World Cup qualification.

The series, set to be played from 5-10 October 2019, will also involve hosts Oman, Nepal, Netherlands and Hong Kong. Each side will play four T20 Internationals before they head to the United Arab Emirates for the 2019 ICC T20 World Cup Qualifier. The Qualifier event is being held to decide the final six sides who will advance to the 2020 ICC Men’s T20 World Cup in Australia from 18 October–15 November 2020.

While the Ireland squad for the Qualifier is set to be selected next month, Head Coach Graham Ford believes there have been strong signs of progress in Ireland in the T20 format:

“I’m very pleased to see this pre-Qualifier warm-up series announced - it’s not only important for our squad to play competitive T20 cricket before the World Cup Qualifier, but to do so in similar conditions to the UAE will be a crucial part of our preparations.”

“We have put a lot of work into improving our T20 skills over the last two years and I think we’re starting to see the benefits of that work. Many of the players have grown impressively as cricketers and I feel that as a team there are exciting signs of progress.”

“While it’s true that we haven’t played as much international T20 cricket as we would have liked over the past 12 months, what we have at the international and domestic level has really demonstrated the potential of the squad – we now need to focus on the task at hand and give ourselves the best shot at world cup qualification.”

For Irish interest, the encounter against Hong Kong on 7 October will be the first occasion former Ireland captain Trent Johnston will coach a side against his former international side, having taken up the Head Coach role for the Asian side last month. Image: Ireland played in Oman for the first time in early 2019

Two games will be played per day at the Al Amerat Cricket Stadium in Muscat, Oman. All times local to the ground.