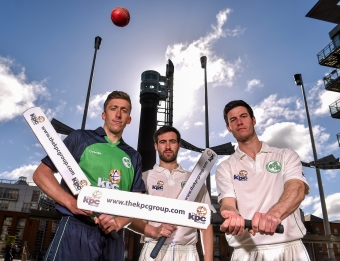 IRELAND today confirmed further one-day internationals against Full Members with the news that New Zealand and Bangladesh will play a tri-series with Ireland in May 2017.

The sides will all play two matches apiece in the six match series, helping New Zealand and Bangladesh acclimatise ahead of their participation in the ICC Champions Trophy which takes place in England next June.

“Gone are the days – we hope – of being starved of the matches we deserve,” said Cricket Ireland CEO Warren Deutrom as he announced the fixtures boost at a speech in Belfast outlining Ireland’s strategic plan for the next five years.

“Rather than getting 9 or 10 ODIs in the four years between World Cups, we aim to play at least that number annually,” continued Deutrom.

“For years now, we have been asking for more matches to test our players, to raise the profile of our sport, to bring in new fans, and to attract more investment – but we’ve always struggled. Now the ICC’s new-look ODI table has changed that, and we have the chance to become the team that John Bracewell wishes to shape – one that stays together and tours, rather than prepares purely for one-off games or major events.”

For Ireland Head Coach John Bracewell, it’s an opportunity to pit his wits against his fellow countrymen. The Aucklander played 41 Tests and 53 ODI’s for New Zealand, as well as coaching them from 2003-2008..

“It should be a fantastic series and one which both myself and the squad will look forward to”, said Bracewell. “We are now getting the volume of cricket that the team needs to take their cricket to the next level. We’re also getting series against the Full Members rather than one-off games which is great.

“We have ODI’s scheduled against Sri Lanka, Pakistan, Afghanistan, Australia, South Africa, Bangladesh and New Zealand over the next year at least. Those series will give us an excellent idea of where we at in terms of progression. With home advantage in at least 15 ODI’s in that period we’ll certainly have plenty of opportunities to test ourselves against quality opposition.”

Ireland and New Zealand have played only two ODI’s in the decade since Ireland gained ODI status. The ‘Black Caps’ winning both – in Guyana in 2007 and Aberdeen the following year.

Ireland have met Bangladesh seven times in ODI’s, including matches at the 2007 and 2011 World Cups. They last met in Ireland in 2010, when a William Porterfield century helped Ireland to a one-all drawn series.