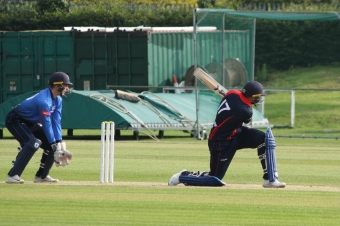 A blistering 65 not out from Greg Thompson, and a canny spell of spin bowling from James Cameron-Dow, propelled the Northern Knights to an 8-run victory over the Leinster Lightning in the concluding T20 of the Test Triangle Inter-Provincial T20 Festival at Pembroke.

Knights captain Gary Wilson won the toss and elected to bat first in the reduced 13 overs-a-side game. The pitch had been under cover all day and understandably had a little bit of juice to it. This showed when Tyrone Kane produced a brilliant away swinger to catch the outside edge of Shane Getkate with the very first delivery of the day. Peter Chase then accounted for James McCollum’s off stump with the first ball of the second over, and the Knights were left struggling on 2-2.

It was down to Murray Commins and Gary Wilson to rebuild. Both batted swiftly, with Commins planting a straight six off long on and Gary Wilson getting a couple of early boundaries away. However, Commins fell at the end of the fifth over, when top-edging a sweep off Simi Singh to Peter Chase at short fine leg. This brought Greg Thompson to the crease, and he would prove to be the key to the Knights innings.

Despite losing Wilson for 21, the Knights’ pair of Mark Adair and Greg Thompson fought back. Thompson started slower with Adair hitting an early six but he soon took off. He cleared the ropes six times during his spectacular 65 not out, which came from only 31 balls. He lost Adair for a quickfire 19 but was joined by Harry Tector, who remarkably hit his first two balls for six, manipulating the field in the process.

Thompson was able to get another couple of big shots away, mostly targeting the pull and sweep shot to accomplish this as the Knights suddenly soared up to 138-5 from their 13 overs, which seemed a very good effort at half time, especially given the start they had.

The Lightning’s response got off to the worst possible start, when Kevin O’Brien mishit a pull shot straight to mid-on in the first over. That didn’t stop Gareth Delany and Andrew Balbirnie from entering into an early onslaught of the Knights attack, both of them clearing the rope with ease in the early part of the innings. Delany muscled sixes over long on and long off, while Balbirnie swept for six into the gardens in Pembroke.

They incredibly brought the score to 73-1 with one ball left in the fifth over in a period of seriously entertaining cricket before a slight hesitation of running led to the crucial run out of Delany for 36, off just 13 deliveries. This looked like a massive turning point in the game. Singh soon departed also, when his attempt hit to leg went straight to long-on, while two balls later, the massive wicket of Balbirnie was taken, Gary Wilson taking an ice cool catch at long-off off the bowling of McCarter for 44.

The rate was climbing back up to 10 an over and the pressure told, Lorcan Tucker caught after top-edging a sweep off James Cameron-Dow. Matt Ford briefly threatened to repeat Saturday’s heroics, but he too fell to Cameron-Dow, trapped in front from a quicker ball.

The Lightning was beginning to creak for the first time and Dockrell fell next ball to Jacob Mulder, who produced a beautiful delivery to clean bowl the Leinster captain. Fionn Hand hit a high ball to deep mid wicket that was well pouched by Mark Adair off Cameron-Dow again. The spin was beginning to unravel the Leinster-based side.

Cameron Dow’s 3-12 in 2 overs had left the Lightning needing a seemingly unassailable 29 runs from the last over, but Tyrone Kane had not given up hope just yet. He clocked the first three balls of the over for six, all over the long on region, the crowd was beginning to get their head round another unlikely and historic Lightning victory. However, Kane connected well with the fourth delivery but didn’t quite have the elevation, finding Adair on the rope at deep mid-wicket to depart for an excellent 26 from 9 balls. Josh Little and Peter Chase could not muster up the necessary 11 runs from the last 2 balls and fell 8 runs short.

It was a fitting end to the Inter-Pro Festival, with a very well contested game between two quality sides entertaining those that had been patient enough to stay around in Pembroke. This time, it was the Knights to come out on top and they finished the whole weekend unbeaten with three wins from three.