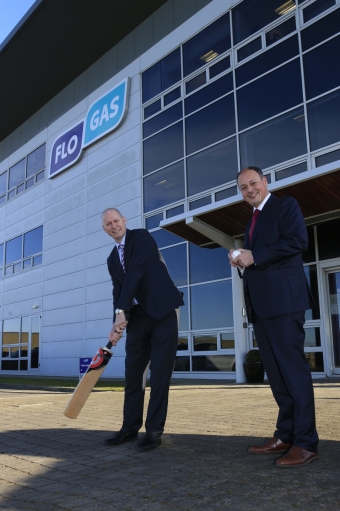 Cricket Ireland have teamed up with FLOGAS, one of Ireland’s leading energy providers, in an official partnership.

The agreement, which begins with immediate effect, will see Flogas become the official energy partner to Cricket Ireland.

The agreement was signed today, at the Flogas Head Office in County Louth.

Speaking at the signing, John Rooney, Managing Director, Flogas, said: “Flogas Ireland are delighted to be teaming up with Cricket Ireland and becoming their official energy partner.

“As Ireland’s only all-Ireland supplier of both LPG (Liquefied Petroleum Gas) and Natural Gas, we are uniquely place to meet the energy needs of Cricket Ireland’s 150 constituent clubs, whether they are on or off the Natural Gas grid, North or South.

“As an Irish-founded and Irish-owned company, we are eagerly supporting the senior men’s team competing in the upcoming ICC World Cup in Australia and New Zealand. Warren Deutrom, Chief Executive, Cricket Ireland, welcomed the partnership agreement saying: “Cricket Ireland are delighted to welcome Flogas on board as the latest addition to the Cricket Ireland Commercial Programme as our new Official Energy Partner.

“Flogas are an all-Ireland brand which we believe will benefit many of our clubs with reduced energy costs into the future. The timing couldn’t be better as Cricket Ireland embark on an unprecedented year of activity in 2015 both at home and abroad. 2015 will no doubt enable Flogas to form a deeper connection with Irish Cricket which is growing at an unprecedented rate.”

Flogas Ireland is a wholly-owned subsidiary of DCC Group plc and operates on the island of Ireland as a leading provider of LPG (Liquefied Petroleum Gas) and Natural Gas to residential and commercial customers alike. Its products can be ordered through their extensive network of approved distributors and dealers across Ireland, or through its websites www.flogas.ie or www.flogasni.com