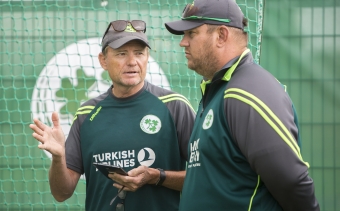 A modern-day sporting rivalry is set to re-ignite in Northern Ireland next week as Ireland and Afghanistan cricket teams begin a six-match series, which both head coaches anticipate will be a tight encounter and a spectacle for cricket fans.

“Ireland and Afghanistan have played some great encounters over recent years and I expect this series will be no different. We have played four one-day internationals in the last 12 months, with the results being two-apiece.”

“For our lads, I expect that to be a little extra added incentive given the last clash was the effective World Cup Qualifier final which we did not play to our best on the day. While that is behind us now, we will be looking to bounce back and show what we can do in front of the home fans.”

“The season has been an important one for Irish cricket and I am pleased with the progress we are making, but acknowledging there is much more to do, particularly in the T20 arena. The Pakistan Test, India T20Is and even the Ireland Wolves series against Bangladesh A have thrown up a variety of challenges, and allowed us to experiment with selections and tactics. We’ll continue to refine these over the Afghan series, keeping in mind that this is a gradual process building up towards the World T20 Qualifier tournament in 2019.”

Simmons said: “There have been some terrific tussles between the sides over the past decade and I expect the upcoming matches to be no different.”

“We have enjoyed great success in the T20 format in recent years and have climbed above Sri Lanka and Bangladesh to 8th in the current ICC rankings. We have great strength and depth to the squad which has an experienced spine and players who have starred in T20 leagues right across the globe.”

“Rashid Khan is the number one ranked T20I bowler and Mohammed Nabi the number one all-rounder, while Mujeeb has been a revelation since coming into the side a year ago.”

“The six matches includes three ODI’s and will give the squad vital exposure to UK conditions ahead of next year’s World Cup and forms a crucial part of our preparations.”

“It’s fantastic for me to be bringing a side back to Ireland where I enjoyed so much success over a long period of time.”

“Both countries have been on a similar path gaining Full Membership and we are now looking to take our game to the next level.”

“I hope Irish and Afghanistan fans will come out in force to watch both teams in what will be a riveting battle between the sides.”
Tickets are on sale through Ticketmaster for the six matches in August, with three match packs available: https://www.ticketmaster.ie/browse/cricket-catid-676/sport-rid-10004
Ticket prices are: