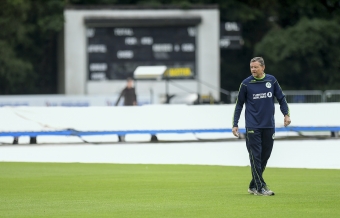 Graham Ford has called up 25 players for a training camp

DUBLIN – Ireland Men’s Head Coach Graham Ford has called up 25 players to participate in a five-day training camp starting this week, and believes the next three week period represents an opportunity for fringe players to make a late bid to be part of the T20 squad that will head to the ICC Men’s T20 World Cup Qualifier next month.

The camp, starting on Thursday, will precede the recently announced T20I Tri-Series between Ireland, Scotland and Netherlands, and form part of the replacement preparation programme that has been developed following the postponement of the Euro T20 Slam.

“It was obviously a blow for our plans with the postponement of the Slam, but I’m pleased we’ve been able to pull together the training camp and Tri-Series. It was crucial that we gained some white-ball cricket in September as we build up towards the T20 World Cup Qualifier in October.”

“By calling up 25 players, we can keep a wide pool of players active as most club and inter-provincial competitions have come to an end for this season. Amongst the 25 players are five players that were originally selected for the Academy squad trip to play Gloucestershire 2nd XI this week, so we’ve been able to bring them in to be part of the senior set-up instead.”

“2019 has seen the emergence of some exciting players and improved performances of the T20I squad, but while we are pleased with the overall direction the squad has taken in the last 12 months, the training camp and Tri-Series still represents an opportunity for fringe players to put their hand up for the Qualifier squad.”