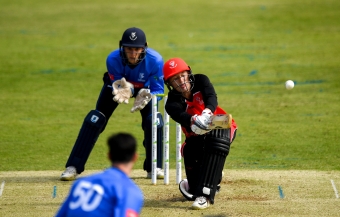 An incredible 34 not out off 13 balls from Matt Ford brought the Leinster Lightning to a 3-wicket win over the Munster Reds. Ford hit a brilliant 16 runs from the last over, clinching the win for the Lightning when it seemed very improbable with two overs to spare.

The Lightning chased down 181, with Ford hitting the very last ball of the game for six, when requiring five to win, sparking delirious scenes in the Lightning tent. It was a fantastic end to a game that had ebbed and flowed all the way through.

Earlier in the game, Munster won the toss and elected to bat. Cormac Hassett and Jack Tector ensured a very good start for the Munster side, they were patient to start, before gradually accelerating throughout the powerplay. They finished the opening six-over spell on 48-0 with Tector cashing in with a couple of boundaries through a few slog sweeps.

The two continued to push on, with Hassett getting in on the act with a couple of boundaries of his own. The two motored the side up to a score of 91 before Tector was the first to fall, after just hitting his first six, he fell to a brilliant catch from Lorcan Tucker behind the stumps off the bowling of Rory Anders for 47. Soon after, Hassett fell one run short of his half-century when being trapped LBW by Fionn Hand. The score was then 113-2 in the 15th over.

It was Stephen Doheny and Max Sorenson who were the men now in, and they needed to push the run rate on. They both did so, with Sorenson scoring a very entertaining 23 from just 12 deliveries. Doheny then took centre stage, as he stroked a couple of fine shots himself, departing in the final over for a superbly made 46 off 23 deliveries. His innings getting him a generous round of applause from the healthy crowd in Sydney Parade. A flurry of late wickets left Munster on 181-7 after their 20 overs. Peter Chase the pick of the bowlers with 3-36.

Kevin O’Brien and Gareth Delany started off the Lightning response with a bundle of intent. The two, who both had scored runs against Middlesex the previous evening, looked in fine nick with the bat. Delany in particular started extremely aggressively, clearing the ropes three times in his 27 off 17 balls. Unfortunately for the Lightning, Delany was dismissed by Jeremy Benton in the last over of the powerplay with the score on 55.

Kevin O’Brien continued where Delany left off. He too was clearing the boundary rope with ease, clearing it four times during his fine 55. He was forming a good partnership with Andrew Balbirnie, but it was a terrific piece of fielding from Eddie Richardson which broke that partnership. He threw the stumps down from point to dismiss Balbirnie, and proved to be a turning point in the game.

O’Brien fell to an incredible catch from Cormac Hassett off Benton, while Singh departed to Sorenson, Hassett taking a more regulation catch this time. Lorcan Tucker and Tyrone Kane both fell soon after, both caught in the deep. Matt Ford joined George Dockrell and the run rate was climbing towards ten an over. They stuck in with a chance though, both of them hitting big sixes, leaving 24 required off the final two overs.

It looked like the turning point for the Reds was when JJ Garth took a stunning one-handed catch just inside the rope to dismiss George Dockrell, that looked to have sealed the Lightning’s fate. Needing 16 off the last over, their chances were slim. But, nobody had given Matt Ford the script.

And if you need 9 to win off the last two balls, just ask Matt Ford how to do it. Actually, let’s show you.  pic.twitter.com/C5VMbXUANw

He kept his side in the game by planting spectacular boundaries, one over extra cover and one over backward point to leave the side needing five off the last ball. He picked Richardson’s slower ball and drilled the ball high towards long-on. It landed a good couple of metres over the rope and sparked a massive fist pump in the middle from Ford and a chorus of cheers and jubilation from the Lightning tent, sneaking over the line by three wickets.

It was a very good start to the Inter-Pro Festival and tomorrow’s play will be eagerly anticipated, with play set to start at 11.30 am weather permitting in Sydney Parade.