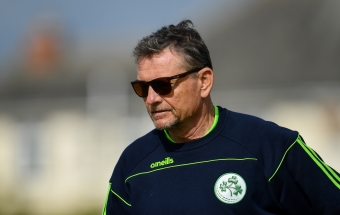 Graham Ford is happy with preparations

MUSCAT – Ireland Men’s Head Coach Graham Ford arrived in Oman overnight and was speaking ahead of the five-nation T20 International tournament to be played at the Al Amerat Cricket Stadium in Muscat starting on Saturday.

Ford, who just signed a contract extension with Cricket Ireland, was upbeat about the preparations of the Irish squad:

“The recent T20 Tri-Series was without doubt very important preparation time for all three nations involved. We have had a very wet provincial summer with much game time being lost, so we really needed to get some good competitive cricket under the belt.”

“The Tri-Series was also an ideal opportunity to give some of the newer, less experienced lads a chance to fill important roles. In general, there were pleasing aspects in all three departments of our cricket – batting, bowling and fielding, and we will use our time well in Oman to ensure further improvement.”

“What was additionally important was the five-day training camp we had before the Tri-Series. It was a productive and intensive time with players getting good opportunities to test their skills under pressure. Importantly, all the lads got a chance to really focus on T20 cricket with plenty of ideas and thoughts on how best to adapt to some of the testing situations that develop in T20 matches.”

“As a coach, the last month has been really pleasing - seeing the energy and work ethic amongst the lads. We now have a few young exciting cricketers within the group. It has been good to see how they have handled the various pressures, and they certainly contribute to a sharper fielding unit.” Many Irish cricket fans have been enthused by the emergence of young talent within the squad, but Ford was keen to point out that a balance of youth and experience is the key to a successful side:

“I have always felt that when exposing young players to the challenges and pressures of a higher level of cricket, it is vital to have some older, experienced heads around them - and I feel the captain [Gary Wilson] and his senior lieutenants have done an outstanding job in building up and supporting the younger lads.”

“T20 is such a fast moving game, situations change rapidly and more often than not it is the team that adapts the best by making very quick, smart and clear plans that ends up victorious. It is comforting to know that we have a hugely experienced and knowledgeable player leadership group headed by Gary who through his years of County cricket has gained much recognition for his player management and knowledge of the game.”

“It sounds a cliché, but we are on a journey as a team – a lot of work has been done over the last two years, but we haven’t finished yet. The work we are putting in as a squad ahead of the T20 World Cup Qualifier has been crucial in giving ourselves the best opportunity to progress to the main tournament in Australia next year.”


The Ireland Men’s squad has arrived in Oman where they will play four T20 Internationals. The squad will then head immediately to Abu Dhabi where they will compete in the ICC Men’s T20 World Cup Qualifier.