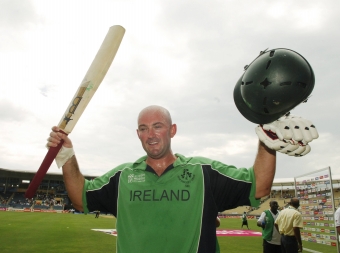 Australian-born Bray played 83 times for Ireland Men between 2002 and 2009, scoring 2,812 runs at 31.95 including seven centuries and 12 fifties. The top-order, left-handed batter made headlines in 2007 when he hit a century in Ireland’s first-ever Cricket World Cup match against Zimbabwe.

Since retiring from playing, Bray has forged a career as a highly-respected cricket coach, completing his ECB Level 3 Coaching qualifications. His coaching career to date has included:

In early 2022, Bray moved back to Ireland to take up the role of The Hills Cricket Club - Head Coach & Pathways Director. He also worked as Assistant Consultant Coach for Munster Reds and Leinster Lightning during the last season.

Bray will take the new role in conjunction with maintaining his role at The Hills. He is expected to begin the Munster role from next week.

For the last two seasons, Ted Williamson and Pete Johnston have overseen head coach duties at the Munster Reds. Williamson will stay in a talent pathway manager role within Munster, while Johnston will revert back full-time with Cricket Ireland with expanded responsibilities.

“I’m absolutely delighted to be the new Munster Reds head coach. I feel it’s a great privilege and to be involved in such capacity in the provincial setup has me very excited. I’m also very happy to be joining forces with Ted Williamson who I have known for many years. Ted is such a passionate Munster man and his undoubted pride for the Munster Cricket Union will only drive me on further to achieve success on and off the field. Lastly, I am champing at the bit to catch up with all the players and management in both the Reds and the Munster Heat.

“With the Reds performing so well last year, and getting a taste of silverware, it will no doubt heighten expectations and, of course, adds that bit more pressure. I feel as a coaching group, if we continue to work with the players to improve their overall performances then hopefully the silverware will continue to stack up for the Munster Cricket Union, which I am quietly confident of doing.

“I’ve been away coaching overseas for the last eight years, so to come back and see how improved the standard of the inter-pros is was definitely an eye-opener. But I also felt so excited for Irish cricket in general to see where the standard of cricket on the pitch has come over the last decade. I am looking forward to working with the Munster boys to hopefully raise the bar again on where we can take our performances on the field.”

“We are delighted to welcome such a highly credentialed coach as Jeremy to Munster. We had such a stellar year in 2022, landing our first Inter-Provincial title, so we hope this appointment will help the senior squad kick on to the next level.

“Jeremy will be responsible for delivering regular weekly coaching hub training sessions, 1:1 and small group sessions depending on the availability of players and conducting match day preparation and coaching operations. We also expect that Jeremy will positively impact on the coaching programmes within Munster Heat and talented players from the various underage representative squads, and work closely with Ted Williamson who has stayed on as Munster Heat / Talent Pathway Manager.

“On behalf of Munster Cricket, I’d like to thank Ted Williamson and Pete Johnston who coached the senior squad during such a successful period in our province’s development. Ted and Pete showed a passion and commitment for the task at hand – we are delighted to retain Ted within the organisation overseeing the talent pathway within the Province.

“I look forward to working closely with Jeremy as he, with the support of Ted, move Munster Cricket forward.”

“We are pleased to see such an experienced and successful coach as Jeremy come in at Munster. He not only knows the Irish structures and pathways of the Performance system, but has experience coaching and consulting within it.

“The quality and depth of talent in the playing and coaching ranks in the Inter-Provincial Series makes the 2023 season one of the most highly-anticipated competition – Jeremy’s addition in charge of the current IP20 champions will provide a new dynamic for players and fans alike to enjoy.

“As part of Munster’s provincial development plan, we have been able to expand the Munster Reds Head Coach into a part-time role covering 70 days annually. In conjunction with his provincial duties, Jeremy will also work closely with coaches at national performance, national academy and national talent pathway level. We wish him well in this new venture.

“In addition to Jeremy’s appointment, we are pleased that Munster have been able to retain the experience and knowledge of Ted Williamson within the coaching set-up – Ted is one of Irish cricket’s most experienced coaches, and will be a valuable asset for Munster working with Jeremy.

“We are also delighted to be able to expand the role of Pete Johnston within Cricket Ireland’s talent pathway. Pete is already the Shapoorji Pallonji Cricket Ireland Academy Manager and Wolves Head Coach, and we have now been able to appoint Pete as the new Under-19s Men’s head coach as well. Pete’s record and successes within the talent pathway has helped now-established senior internationals in their careers, and we look forward to him bringing through a new emerging cohort of players along with National Talent Pathway Manager Albert van der Merwe.”