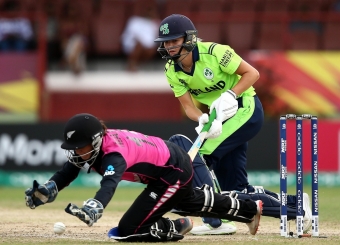 GEORGETOWN - It was a big night for Irish cricket tonight as four legends of Irish women’s game bade farewell to the international arena that they have graced collectively for more than 75 years. Cecelia Joyce, Isobel Joyce, Ciara Metcalfe and Clare Shillington all retired following the match against New Zealand and were immediately inundated with tributes from around the cricket world.

The match against New Zealand was the final Group Stage match with neither side in contention for the semi-finals.

After captain Laura Delany won the toss and chose to bat the New Zealand bowlers dominated the innings, restricting Ireland to 79-9 after its 20 overs.

Clare Shillington (12 from 22 balls), in the last match in green, started confidently but played back to a low skidding delivery and was bowled by Leigh Kasperek (3-19). Gaby Lewis decided to counter-attack and compiled an eye-catching 39 (36 balls; 5 x fours) - now having scored an even 100 runs in the last two T20 Internationals she has played against the White Ferns.

In response, the New Zealand openers Sophie Devine (51 off 22 balls)  and Suzie Bates (11 off 12 balls) put on a 69-run opening stand taking away the slimmest of possibilities of an Irish upset win, and despite both openers falling in the final overs, the White Ferns ran out victors by eight wickets.

“What could we have done better? All around really - batting, bowling. Batting, once again, we were happy enough with the powerplay, but as in previous games once we got through the powerplay we lost clusters of wickets again. Then with the bowling, I think with the way Suzie Bates and Sophie Devine batted today anyone would have found it hard to bowl to them.

“Credit to New Zealand, I thought they bowled really well. I think one positive for us is Gaby Lewis, she’ll be the first one to admit she hasn’t had the best tournament up to this game, but tonight showed a glimpse of what she can do. She’s a huge player for us, so I think that was a massive positive for us.”

“Positives from the tournament, well we don’t play a lot of internationals to be honest, so any time we’re at a world cup there are learnings for us. I think some of the younger girls have stepped up at times. We’ve got four retirees this evening, so now the younger girls have to step up, but they have done that at times during the world cup and that’s a positive for us.”

Asked whether the squad knew about the Joyce sisters retirement before the game:

“No we didn’t. We found out after the game in the huddle. There were definitely a lot of tears. Ceils, Ciara, Shills and Isobel have been four incredible servants of Irish cricket and I don’t think Irish cricket would be anywhere near where it is today without them. They’re going to be a huge loss - they’re champions on the field but off the field as well. We’re going to miss them a lot.”

“As much as we’ll miss them, it’s certainly going to be a different dynamic without them.”

More to come on the four retirees.