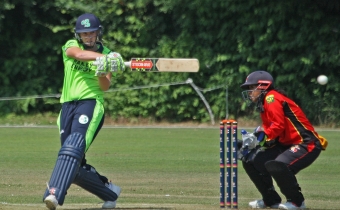 Kim Garth will be heading to Melbourne after the World T20s

Four overseas development scholarships have been awarded through a programme funded in partnership with Northern Ireland-based international company Devenish Nutrition, which will see Laura Delany, Kim Garth, Rebecca Stokell and Una Raymond-Hoey heading to Australia after the ICC World T20 tournament in November.

The Devenish Nutrition Women’s Overseas Player Development Scholarship Programme provides funding for up to four players annually to spend between 3 and 6 months overseas, developing their skills and knowledge of the game in a different culture and climate, through excellent coaching, practice and competitive matches.

Alice Stanton, former international cricketer for Ireland and current Director of Human Health with Devenish Nutrition, outlined the commitment of funding towards the programme:

“We are delighted to be involved in supporting women’s cricket in Ireland. As a former player I have been really excited to see the progression of women’s cricket over the past few years, and it is great to see a very strong squad about to compete in yet another T20 World Cup in November.”

“The Devenish Nutrition-sponsored scholarships will provide development opportunities for current and future international players, which should lead to even greater successes for the Irish Women’s cricket team in the coming years.”

All four recipients will head to Australia for the Irish winter, and play club cricket alongside international and state-representative players, as well as receiving coaching from high-level coaches within the Australian system.

Laura Delany, the 25-year old Irish captain since 2016, will head to Melbourne to play club cricket in the Victorian Premier League:

“I am delighted to have been picked as one of the recipients of the Scholarship programme. This is the first programme of its kind available to female cricketers in Ireland and I am incredibly grateful for the opportunity.”

“I previously travelled to play club cricket in Australia, but missed out on the chance of playing a full season due to injury - so I am looking forward to having the chance to put that right this winter. I would like to thank those behind the Scholarship who have provided the funding, I have no doubt it will be a valuable experience for all involved.”

Kim Garth, the 22-year old all-rounder who has spent two seasons as a Rookie in the Women’s Big Bash League in Australia, will head to Dandenong Cricket Club in Melbourne:

“I’m absolutely delighted to be one of the recipients of the Devenish Nutrition scholarship. I’m really excited to get out to Australia again and spend the season in Melbourne following the World T20 tournament. I played the beginning of the season with Dandenong Cricket Club last season and I’m really looking forward to joining back up with them this year in what will hopefully be another successful season for the club. I’m very thankful to Cricket Ireland for giving me this opportunity.”

Una Raymond-Hoey, the 21-year old top order batter will intern with the Western Australian Cricket Association (WACA) and be based with South Perth Cricket Club:

“I’m hugely grateful for the support Devenish Nutrition and Cricket Ireland are providing for us this year. Many of us are trying to get the experience of playing overseas as we know it can be so beneficial to improving our game in a different environment and bringing these skills back to our club scene in Dublin, which can only increase the standard here at home.”

“I personally made the decision to take a year out before college and played in Hobart for a season, which in hindsight I believe was crucial to my development as a player and a person.”

“I’m really looking forward to going to Perth to finish out the Australian club season with South Perth CC, who will have six 50-overs matches remaining when I arrive after my university exams in January. I will also be working at the WACA for my Sports Science placement during this period so am massively excited for the three months.”

“I’m absolutely delighted to have been awarded the Devenish Nutrition Scholarship. I’m extremely excited to get to Melbourne after the World Cup and use this opportunity to improve my skills and develop my game in a different playing environment.”

“I’d like to thank Devenish Nutrition and Cricket Ireland for giving me this opportunity, I hope to return having improved all aspects of my game and bring back more experience into the Irish squad.”