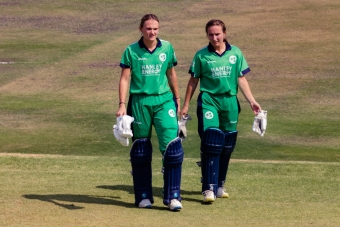 HARARE, Zimbabwe – Irish openers Gaby Lewis and Leah Paul hit their second century-partnership in as many matches as Ireland dominated the third one-day international against Zimbabwe, recording an eight wicket victory and taking a 2-1 series lead with one game to play.

Lewis followed up her ODI career-best 65 in the last game with an even more imperious innings of 96* off 129 balls. Known as an aggressive opener in the T20 format, Lewis has smoothly transitioned her game to a more patient and selective batter in the longer form of the game – and has rarely played a false shot all series. Meanwhile Paul – who hit 95 in the last game – compiled a neat 63 from 83 balls to continue her good run of form with the bat as well.

The pair have now registered first-wicket partnerships of 28, 135 and 145 in the three matches this series – and today looked likely to bat through to a 10-wicket victory until the unlucky Paul chased a wide ball that caught the toe-end of her bat and popped up nicely for the Zimbabwean keeper Modester Mupachikwa to complete the dismissal.

The loss of Amy Hunter (4) was the only down side of what was a perfectly paced and confident run chase by the visitors’ top order. Lewis struck nine boundaries in her innings and came within a boundary shot of what would have been her maiden ODI century – but put the team before her personal ambition and steered her side to victory by taking the runs on offer towards the end. The nature of her shot to win the match - a calm off-drive for one - seemed a sign that the team’s position was foremost in her mind.

Congratulations to Gaby Lewis for her second ODI half century.

Earlier in the day, after Zimbabwe had won the toss and elected to bat first, the home side sought to nullify the accurate line-and-length bowling from Jane Maguire (1-30) and Paul (2-24). Chiedza Dhururu (16) and Mupachikwa (23) displayed a solid defence in what appeared to be ideal batting conditions early. However, the introduction of leg-spinner Cara Murray (2-42) saw both Zimbabwean openers back in the pavilion with the score on 45 in the 16th over.

Mary-Anne Musonda (26) and Ashley Ndiraya (7) stabilised the innings with a 31-run stand, but three quick wickets for five runs in the space of four overs – sparked by Ireland captain Laura Delany’s intervention with the ball to remove Musonda – had Zimbabwe in a precarious position at 81-5 with more than half their overs still to be bowled.

While lower-order contributions by Precious Marange (20), Tasmeen Granger (20) and Nyashsa Gwanzura (18) gave Zimbabwe’s final total a late boost, it was the leg-spin of Celeste Raack who helped wrap up the home side’s innings taking an ODI career-best 3-34. Zimbabwe’s 178 looked below par, and would soon prove as such with the dominant Irish batting performance that followed.

The two sides meet again at the same venue on Monday for the fourth and final ODI.