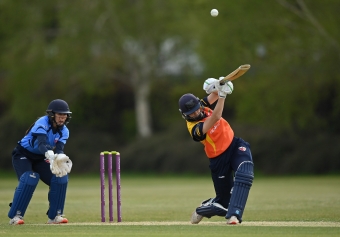 Gaby Lewis on her way to 94

DUBLIN – Irish international Gaby Lewis struck her second half-century on the trot as her Scorchers side claimed back-to-back wins in the Arachas Super 50 Cup at Pembroke Cricket Club.

The call looked a good choice when Typhoons openers Rebecca Stokell (28) and Rachel Delaney (73) put on 66 runs for the opening stand. However, with the loss of Stokell - and Sarah Forbes (1) soon after - the Scorchers bowling attack began to dominate, first by drying the runs up and then by taking regular wickets.

Delaney sought to play the anchor role, bringing up her half-century from a patient 81 balls, and played a number of attractive off-side shots. However, she couldn’t find a batting partner to stay with her - with three run outs along the way showing an area of the game that head coach Clare Shillington will need to tighten up on.

Raack played an entertaining cameo towards the end with a run-a-ball 23, but in the course of her innings sustained a leg injury that subsequently prevented her from taking the field in the second innings. The Typhoons innings was lifted to over 200 with a late overs 19 from Georgina Dempsey, and the Blues finished on 208-9 after their 50 overs.

In response, the Scorchers lost last season’s top-scorer Leah Paul - run out for a duck, but Gaby Lewis (94) and Alana Dalzell (10) put on 82 runs for the second-wicket to put the Scorchers on the road to victory.

Lewis looked in imperious form striking balls to the boundary on multiple occasions over extra cover and mid-off, as well as equally well-timed shots square of the wicket. Her first 50 runs came from 58 balls and included 8 fours, and she continued to keep the run rate ticking over. Then, just six runs shy of what would have been her first century at this level, she top-edged an attempted sweep shot and was caught by a tumbling Georgina Dempsey at square leg.

Sophie MacMahon didn’t let the run chase falter with an impressive 44* from 47 balls, and the Scorchers ran out winners by 4 wickets with 8 overs to spare

Gaby Lewis was named Player of the Match for the second match in a row.