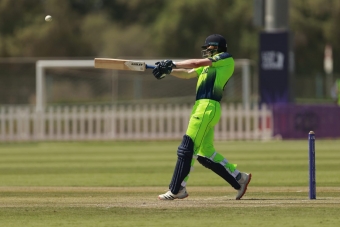 ABU DHABI, UAE - An unbeaten 50-ball 88 from Gareth Delany lifted Ireland to a comfortable 33-run win over Bangladesh in their final warm-up fixture ahead of the ICC Men’s T20 World Cup.

Delany showed blistering power in a knock that included eight sixes and three fours, taking Ireland to a total of 177-3. In response Bangladesh were derailed by the loss of three wickets inside three overs, with Ireland’s frontline bowlers all among the wickets in their last run-out before taking on the Netherlands in the World Cup next Monday.

Ireland began strongly with the bat as Paul Stirling showcased his usual explosiveness by hitting five boundaries inside the first four overs. While left-arm spinner Nasum Ahmed bowled Stirling for 22 – Stirling failed to connect with a slog sweep from the final ball of the fourth over – Ireland kept attacking through Delany and captain Andrew Balbirnie.

Balbirnie pulled Mustafizur Rahman for six in the fifth over and Delany followed his lead in the sixth, going down the ground for a maximum off Nasum. A fine Taskin Ahmed yorker accounted for Balbirnie (25) and the same bowler dismissed George Dockrell (9) a couple of overs later, but Delany was building towards his flurry of sixes.

A Shoriful Islam slower ball was swatted straight, Soumya Sarkar was lofted over extra cover, and Mustafizur’s third over was greeted with back-to-back sixes. Harry Tector turned over the strike with a run-a-ball 23 as Delany stole the show at the back-end of the innings – the right-hander’s last 38 runs came off 17 deliveries.

With the ball, the opening duo of Craig Young and Josh Little got Ireland off to an excellent start: Young accounted for Mohammad Naim in the first over before Liton Das chopped on from Little’s second delivery of the match. The big-name scalp of Mushfiqur Rahim followed in the third over to leave Bangladesh 15-3.

Soumya Sarkar and Afif Hossain took Bangladesh past fifty, but the latter reverse-swept a Ben White delivery into the hands of Paul Stirling at backward point in the eighth over. Soumya was then run out by Harry Tector in the 12th over, and regular breakthroughs followed.

Simi Singh fired one in to bowl Shamim Hossain for 1, and Mark Adair made hay at the death to pick up three wickets, including Mustafizur with the final ball of the match. Delany was the only bowler on show who didn’t pick up a scalp, but he’d long done his job.

After the match Gareth Delany said:

“I’ve found the going pretty tough so far on the slower wickets, but thankfully today there was a lot more pace which suits my game better. I was just happy to come off today and help to post a competitive score.”

“We’ve all acclimatised to the heat pretty well now - we’ve experienced training and playing at all stages of the day, so we’re definitely more used to it. It does still take its toll in terms of fluid loss, so it’s important we stay well hydrated.”

“The group’s confidence has definitely improved since the UAE series - we were all very disappointed in losing it, but we’ve put in two very strong performances with both the bat and the ball in these warm-up games. Hopefully we can continue our good form into the first game against the Dutch.”