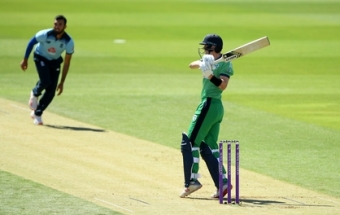 DUBLIN – Irish international Gareth Delany will join Vitality Blast side Leicestershire Foxes for the 2020 competition, including the knockout stages should the Foxes progress, after Cricket Ireland approved the move by submitting a No Objection Certificate.

23-year-old Delany made his T20 International debut in July 2019 and was recently part of the ODI side that beat England in the third match of the series earlier this month in Southampton. He will be available to play for Leinster Lightning’s first T20 of the Test Triangle Inter-Provincial Series, before departing for England.

“I’m really excited to be playing in the Blast, I was really unsure if I’d ever have the opportunity to play in County cricket, so I’m over the moon to be playing with Leicestershire and very grateful to both the club and Cricket Ireland for this chance. It’ll be a challenging environment, but one from which I am hoping to further develop my game.”

“We were pleased to be approached about Gareth’s availability as it is a sign of the growing profile and awareness of the young talent being produced in Ireland.”

“While it comes on the eve of the Test Triangle Inter-Provincial Series, we spoke to the Leinster Lightning coaches and agreed the valuable development experience Gareth will gain from this opportunity will be of long-term benefit to Irish cricket.”

“This year’s inter-provincial series is set to be the most competitive in modern times, and while Gareth will be a loss, the Lightning side has plenty of depth and it will be an opportunity for another player to step up.”

“With the loss of access for Irish players to the County cricket system, we knew opportunities would hopefully still come along for talented Irish cricketers to be signed as overseas players, and that has now transpired. It’s a credit to Gareth’s progress and dedication, and also credit to the many international, domestic and club coaches who have played a part in his career to date.”

“Gareth is a talented young all-rounder we have been keeping an eye on for a while. We have been looking for a top-order batsman and a leg-spin bowler, as they are worth weight in gold in T20 cricket, and Gareth ticks both boxes for us. He is young, hungry to do well, and has good experience for a young player so will be a great addition to our squad.”