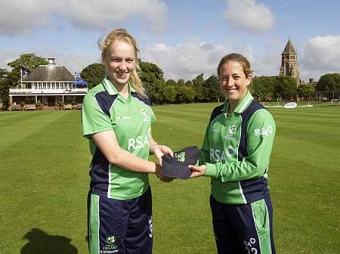 Pembroke all-rounder Garth, playing in her 50th senior international, proved virtually unplayable as she tore the heart out of the Scottish batting.

The 18 year-old dismissed Annette Drummond and Fi Urquhart in successive deliveries, and with her Sydney Parade bowling partner Louise McCarthy (1-4) removing Rachel Scholes, Scotland were reeling on 3 for 3. Liz Priddle provided a recovery of sorts with 23 from 34 balls, but wickets for Elena Tice (1-15), Lucy O’Reilly and Isobel Joyce - both of whom claimed 1 for 8 - coupled with two run outs, saw Scotland dismissed for just 52.

Garth finished off the Scotland innings bowling Lorna Jack with one ball remaining in the innings.

Any hopes Scotland had of early wickets were quickly extinguished by Clare Shillington who bounced back from her first ball dismissal yesterday to smash seven boundaries in an unbeaten 31.

The YMCA opener shared stands of 23 with Shauna Kavanagh (7) and Laura Delany (9) as Ireland won in just 7.5 overs with 8 wickets to spare. Speaking to www.cricketireland.ie following Ireland’s win, star with the ball Kim Garth paid tribute to the efforts of her fellow bowlers: “I was honoured to receive my 50th cap today. Was great to top it off with such a convincing win. Every bowler played their part in restricting the Scottish batters. It was important for us to take wickets up front and put Scotland on the back foot early on.

“It was great to see Shillers bouncing back from yesterday with a super knock today to top off a great all round performance.”

The two sides meet again on Friday at 3.30pm when once again live scoring will be provided by CricHQ.