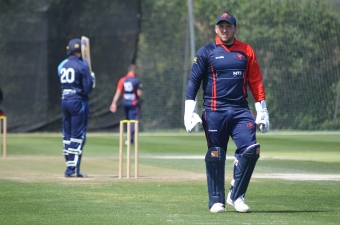 Gary Wilson believes the T20 Festival will be a great launchpad

Wilson has recently relocated back to Belfast after spending 12 years playing county cricket for Surrey and Derbyshire, and is now a key senior member and captain of the Northern Knights. He was appointed captain of the Ireland T20 squad in 2018, however missed the tour in early 2019 to Oman and India as a result of an eye condition. Keen to make up for lost time, Wilson believes that the three-day T20 Festival starting tomorrow is the ideal place for the most talented players in the country to showcase their skills before the selectors.

Speaking after a training session in Belfast, Wilson said:

“T20 cricket is all about playing with freedom, so my role as captain is to embrace that and encourage the lads to go out there and showcase their skills. Most of the guys who will be taking the field against Zimbabwe in July will be playing in this Festival, so I think it is great preparation for the internationals coming up - to be playing the best guys in the country over three days, you don’t get much better than that. And the Festival itself promises to be a great occasion - I know last year the boys loved playing in it and I don’t imagine it will be any different this year.”

“Internationally, we haven’t really been where we want to be in T20 cricket over the last few years - it’s nice to have gone from 18th to 15th this year, but for me it’s less about ranking points and more about qualifying for the T20 World Cup. And this Festival will be an important part of the international squad’s preparation.”

“As for my approach to this weekend as captain, I don’t like to come into an occasion like this with too many plans - I like my teams to be reactive and to assess conditions on the day. That’s what we’ve said to the boys - there is no point planning for one thing and you rock up there and see a completely different wicket. Sure, we’ll have set plans for some of the guys we’re playing against - we know them pretty well - but in terms of overall tactics, we’ll see the conditions and react accordingly.” A second three-day T20 Festival will be played in Bready in August. More information on the Test Triangle Inter-Provincial Series can be found here.