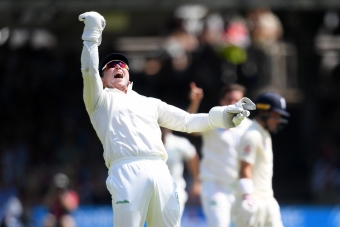 Gary Wilson has brought to a close a glittering playing career

BELFAST – Ireland Men’s stalwart Gary Wilson has today announced his retirement from professional cricket, bringing to a close a 16-year international career and a successful first-class career that spanned English county and Irish inter-provincial cricket. He will take up the new full-time role as Head Coach and Pathway Manager for North West Warriors.

Holywood-born Wilson, 35, made his international debut for Ireland in June 2005 against the MCC and appeared 292 times for the senior side – the third most capped Irish international in history.

He finishes Ireland’s second-highest wicket-keeper in terms of dismissals behind the stumps with 160 catches and 33 stumpings. In addition, given his career overlapped with Niall O’Brien, Wilson was also an excellent outfielder, taking 60 catches.

A very accomplished middle-order batter, Wilson registered 5,959 runs for Ireland, hitting one century and 30 fifties – his highest score being 113 v Netherlands in 2010.

In 2018, Wilson was given the honour of captaining the Ireland Men’s T20 squad, and oversaw the side’s qualification for the ICC T20 World Cup 2020 (which was subsequently rescheduled to 2021). Image: Gary Wilson at full stretch during the Ireland v England ODI in 2019

A graduate of the MCC Young Cricketers programme (from 2005-2007), Wilson had a highly successful professional career in England:

He then returned to his hometown of Belfast and played two seasons with the Northern Knights, captaining the side to the Inter-Provincial T20 Trophy in his first season.

Wilson has completed his ECB Level 3 coaching certificate and has gained a wealth of coaching experience, including roles as Academy Coach at Surrey CCC (2014-2016), 2nd XI Player/Coach at Surrey CCC (2016), part of the Senior Management Team in charge of first team at Derbyshire CCC (2017-2019) and Director of Cricket and First Team Coach at CSNI CC (2019–present).

After a competitive recruitment process, Wilson was yesterday offered the role of North West Warriors Head Coach and Pathway Manager – the first time this role has been offered as a full-time appointment.

The role will see him take overall responsibility for the North West Warriors, coaching and developing players in the North West Warriors and Emerging Warriors men’s squad. In addition, he will be responsible for the planning and management of the regional development programme for the province’s talent pathway representative teams (boys and girls) and the women’s performance programme. Image: Gary Wilson completes a run out at the T20 World Cup Qualifier in 2019

“To be named T20 captain for Ireland in 2018 was probably my proudest moment internationally. Again, growing up it was something I could only dream of. As for achievements, obviously the various world cups and T20 world cups, but probably my best game in an Irish shirt came in a world cup match against UAE in Brisbane [he hit 80 from 69 balls and took two catches in a Player of the Match performance]. There were so many memorable games over the years – the Zimbabwe game in the same world cup was probably my favourite game to be part of.”

“It was guys from the NCU that really inspired me to play for Ireland – the Patterson brothers, Kyle McCallan, Andrew White and Ryan Eagleson – seeing those guys play for Ireland, they were my heroes growing up to be honest and I just wanted to follow in their footsteps.”

“I was lucky enough to have such a long career in England, I was actually a Surrey supporter growing up as well, so to be able to play for them at The Oval for over 10 years, and to captain them and win the County Championship Division 2, to win a CB40 and get to theT20 finals day twice – they were things I never thought I’d ever had a chance to do as a kid. I’m so grateful for the opportunity that I had to play for Surrey and Derbyshire. The two years at Derby I gave my all, and to get out of the group stage for the first time in the County’s history is another achievement I’m pretty proud of.”

“Coaching is always something I’ve thought of once I finished playing. What’s exciting about it here in Ireland is the impact I think I can have - the opportunity to improve players. Hopefully, I can use some of my experience both from England and playing for Ireland in order to do that. I’m really passionate about Irish cricket and hopefully can help bring through the next generation and see Ireland flourish in the future really excites me.”

“I think it’s a great time to be taking on the North West Head Coach role, and hopefully I can bring that international and county cricket experience to the role. I think that the performance pathway side of the role is exciting as well – it’s about bringing on the next generation and making sure they are ready for North West cricket. At the end of the day we want to see more North West players playing for Ireland and in the Inter-Pro competition. I think if we get it right at the pathway and emerging levels, then hopefully we’ll see just that.”

“There are so many coaches who I’ve admired throughout my career. The ones who have had the biggest influence on me were Adi Birrell, Phil Simmons and Graham Ford. I’m thankful to Chris Adams who was the coach that first gave me an extended run in the first team at Surrey, also Alec Stewart at Surrey too – and John Bracewell at Ireland. Even going back to my younger days in Ireland, Brían O’Rourke had an impact on me, and then latterly once I moved back Simon Johnston was someone I really enjoyed working with. It’s hard to single out individual coaches who have made a difference, but those guys definitely deserve a mention.”

“Gary was a brilliant teammate and a great friend to have - a guy who you would never hesitate to chat to about anything on or off the field.”

“He was one of those people who - every time he pulled on the jersey - wore his heart on his sleeve, always leading by example in everything we were trying to do as a team. Within the set-up, he was one who would always offer to help develop the next crop of young Irish cricketers.”

“I have no doubt he will be a successful coach and I’m looking forward to seeing his progress. We are very fortunate to have someone like Gary still involved in Irish cricket - and long may it continue.”

“Gary has enjoyed a long and very successful cricket career, and has put in many fine on-field performances for Ireland since 2005. During recent times he has also made valuable contributions as a leader and has played a big part in helping younger players find their feet at international level.”

“It is disappointing to learn that we will no longer have his playing and leadership qualities within the national squad, but thankfully, there is a decidedly positive side to this news. Gary now takes on a very important role within our cricketing system and I have no doubt that he will positively impact on many cricketers, ensuring that exciting young talent is identified and well prepared for the challenges of inter-provincial and international cricket. I congratulate the North West Cricket Union on a very good and positive appointment.”

Wilson will start in his new role this month – with the first Inter-Provincial match with the Warriors scheduled for early May.