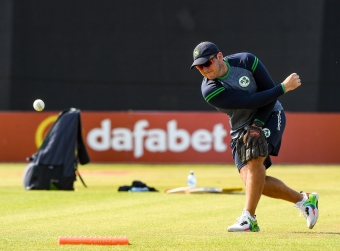 DUBLIN – Cricket Ireland has today announced the appointment of former internationals Gary Wilson and Ryan Eagleson to the coaching staff of the Ireland Men’s senior squad as part of structural changes made to the support set-up.

Wilson, 36, a former Irish international T20I captain played 292 times for Ireland. He was appointed North West Warriors head coach in 2021 and led the side to Inter-Provincial T20 Trophy success last year. Wilson has captained and coached at both Derbyshire County Cricket Club and Surrey County Cricket Club, and has been seconded as an assistant coach since September 2021. He will take up the role of High Performance Batting and Wicketkeeping Coach immediately.

Eagleson, 47, a former Irish international seam bowler played for Ireland 65 times, and had stints with Derbyshire, Essex and Glamorgan in the English county system. He has been the Ireland Under-19 head coach – taking multiple squads to Under-19 World Cups, and is one of a few coaches in Ireland with the ECB Level 4 qualification. He has also been the Performance and Pathway coach for the National Academy programme since 2009, and has been seconded as Lead Bowling Coach since September 2021. He will take up the role of High Performance Pace Bowling Coach immediately.

The coaching restructure process was initiated after the departure of former National Bowling Lead Stuart Barnes in August last year and of the former men’s head coach Graham Ford. The new coaching structure is one of a number of previously-planned measures which are aligned with the outcomes of the T20 World Cup Review recently undertaken by Portas Consulting, which recommended:

The first two coaching roles have been announced today, while the Spin Bowling Coach will be advertised shortly. “We are delighted that Gary and Ryan have accepted these full-time coaching roles and look forward to seeing the new national coaching set-up come together over the coming weeks.

“Gary was seconded to the men’s performance squad towards the end of last summer, and more recently since the USA tour, and his quality has shone through.  Gary excelled as head coach of the North West Warriors for the last year, where he helped transform the Warriors into a trophy-winning team. We have received great support and collaboration from the North West Cricket Union during this process and they should be hugely proud of how quickly that experience helped Gary’s journey towards coaching at national level. Gary is very ambitious for Irish cricket and its future, and with his knowledge and experience of captaining at national and county level, and coaching in national, county and provincial roles, he will offer great leadership and support to [new head coach] Heinrich at an important time.

“Likewise, Ryan brings an extraordinary amount of experience and expertise to the role he has accepted – gained not just through his playing days, but his more than 13 years’ involvement in Cricket Ireland’s pathway coaching system. He brings with him the knowledge of, and existing relationship with many of the players he will be working with, having already worked with many at underage levels. He is also one of a few coaches in Ireland with the ECB Level 4 qualification, which is no mean feat to have attained.

“Just as important is that both Gary and Ryan have represented Ireland and know how special it is to wear the green shamrock. Whilst we have had some great overseas coaches, and will continue to draw on the best coaching talent in the world where appropriate, we feel it is important to have coaches in the dressing room who know what it feels like to play for Ireland, and embrace all that is special about our game as an all-Ireland sport.

“Both coaches will start their roles with immediate effect and we are grateful to the NWCU for allowing Gary to commence the role immediately. Ryan’s previous role will be part of a review of our talent pathway structure over the next few months.

“All specialist coaches will - as part of their remit - ensure a succession plan of specialist skill-sets in developing players. They will work with not only the men’s senior squad, but also our women’s performance squad and talent pathways, complementing the coaching going on in our Provincial Coaching hubs.”

“While I am delighted to accept the role, I would like to first and foremost thank the North West Cricket Union, their Board and General Manager Peter McCartney for allowing me to make the move after a great year that I’ve had with them. There aren’t any other jobs in Irish cricket that I would have left the North West for – it is an honour to accept this post, Irish cricket is what I love and I am looking forward to getting started.

“I’ve been working as a consultant with the national squad there for the last three months alongside David Ripley and Ryan and it’s been great to see it from the other side of the fence and hopefully to have helped our players. I’m looking forward to building on those relationships and helping those players continue to improve. We have an exciting group at the minute and it’s going to be great to be involved in helping them move forward. I’ve spoken to Heinrich [Malan] a fair bit over the last month or two via WhatsApp and a few video calls – it’s been great to hear his thoughts and how he believes we can go about improving Irish cricket, and I can’t wait to get started working with him.

“I have been lucky enough to work alongside some great coaches over the years, mainly as a player – you really can’t look much past Graham Ford as a coach I greatly admire. Adi Birrell and Phil Simmons made a great impact on my early career as well, and also over in England I was very lucky to work with Alec Stewart and John Bracewell as well with Ireland. I have been very lucky to have some great coaching pedigree there from which I hope I can take bits and pieces to help create my own way and develop my own coaching philosophy over coming years.”

“I’m delighted to take on this new role now – I’ve worked with Cricket Ireland for 13 years now, mainly with youth squads, the Academy and players coming through the pathway, but it’s always been an ambition to go as high as I can with my coaching, so to work with the senior team is something I’ve always wanted to do. I’ve obviously had a taste for the role over the last few months with the T20 World Cup, the West Indies trip and the Qualifier there. As a coach you want to work at the highest level, and in Ireland that’s working with the senior team, so I’m really looking forward to it.

“Coming into the senior set-up you know that guys have been there and know how to go about their practice, so it’s just about getting in there around the bowlers, chatting with them about their plans and making sure they have that match intensity in training. At this level it’s as much about learning about individual’s games to identify the little ways you can help – that may be tactical or technical, but these last six months have given me a chance to get around and see how each bowler goes about their match day preparations.

“The good thing looking ahead is I’m going to be on the Wolves tour coming up with Heinrich [Malan], which will be a great opportunity for me to be around him and see how he works and how he wants to shape things moving forward.

“I’ve really enjoyed coaching at pathway, Under-19s and at that level – you have the Under-19 World Cups, which has been a massive experience for young Irish cricketers to see international cricket up close – the international venues, the travel, the opposition, it just puts you in a really good place to become a senior international. But I think the most joy from that role was seeing young players who have come through the system go on and have successful senior careers for Ireland.

“In terms of coaching influences, I go back to my playing days when the late Mike Hendrick was the coach of Ireland – I have nothing but good things to say about Mike, he pushed the guys hard because he wanted the players to play for Ireland with pride and passion. As a coach, though, you are just all about trying to pick up anything you can from other coaches you work with – I have worked with a lot of different coaches over the years, but if you can pick up one or two things each time and add them to your toolbox along the way it helps you with your approach. I’ve really enjoyed working with Rips [David Ripley] over the last few months – to pick his brains and see how he goes about his business has been great. Graham Ford, who I got to work with at the T20 World Cup was also one I learnt a lot from – you can only improve yourself when you’re regularly working with coaches of that calibre.”