Gary Wilson: “Whoever wins the next game will probably win the trophy” 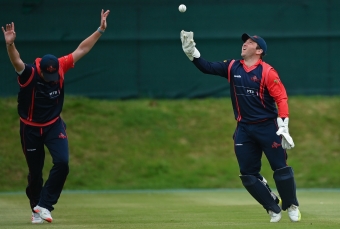 BELFAST – After his side’s convincing eight-wicket win over the North West Warriors yesterday at Comber, Northern Knights captain Gary Wilson believes the destination for this year’s Test Triangle Inter-Provincial T20 Trophy may be decided tomorrow when the Knights take on Leinster Lightning at Pembroke.

Reflecting on the victory over the Warriors, Gary Wilson said:

“I thought that was a very good win. It was a professional performance. They were 80-3 at one point so being able to claw them back to 115 all out was very pleasing.”

“North Down is a quick scoring ground regardless of the wicket being a bit slower than you’re used to here. To keep them to 115 was a great team performance with the ball.”

“A special mention to Mark Adair. As a captain, he is an absolute pleasure to be able to throw the ball to because he thinks about the game so well and I think particularly in T20 cricket, he is a really outstanding performer.”

Wilson shared a partnership of 62 from 47 balls with McCollum, adding:

“You just have to get him back on strike. When someone is batting like that, it’s great because it takes pressure right off the whole chase.”

The Knights will face Leinster in the shortest format for the first time since their victory in 2019 and Wilson says they will enter Thursday’s match full of confidence.

“They are in a bit of form as well. It was disappointing that we had the game rained off last week. I don’t think it would be too far wrong to say whoever wins that game will probably win the Trophy, so we are looking forward to it.”

Northern Knights Head Coach Simon Johnston oversaw another T20 Knights victory and was impressed with the improvements made by his squad.

“That was brilliant from start to finish. We really set the tone with the ball and in the field. That was as good as I’ve seen us in a while. I remember saying a couple of weeks ago that we looked rusty but we got rid of all of that today.”

“I can’t say enough about Graeme McCarter, and Mark Adair was as impressive as you’ll see with the skills, knowledge and ability to get out of situations and then just dominate when he needs to. David Delany bowled three very quick overs in the middle and got them jumping a bit and put them on the back foot.” James McCollum has made an opening spot in the Knights side across formats his own and Johnston was full of praise for his efforts.

“He had a bit of a rough time being left out in England. He has worked so hard for 18 months on his white ball game and has done everything asked of him. He has gone even further in the last six months and you won’t see anyone work harder. When someone tells him he can’t do something or needs to work on something, he does it and that was testament to him today. That has been the way he has been playing for two weeks in the nets and he just needed a chance to showcase it. He has taken his white ball game to a new level today so it was brilliant to watch.”

Graeme McCarter will be missing for their trip to Dublin but Johnston is looking forward to the encounter.

“Hopefully everyone pulls up alright in the morning. Grum [McCarter] is a big loss but hopefully someone can step up. The squad is a bit stronger this year. We are really excited for it and to see what happens.”

See current table - as it stands