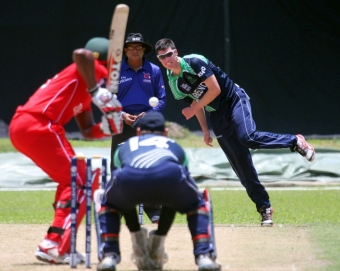 George Dockrell has become the ICC Associate and Affiliate Cricketer of the Year at the LG ICC Awards in Colombo.

George Dockrell has become the ICC Associate and Affiliate Cricketer of the Year at the LG ICC Awards in Colombo.

The voting academy chose Dockrell ahead of other top Associate and Affiliate players including his team-mates on the short-list Kevin O’Brien, Ed Joyce and Paul Stirling as well as Afghanistan’s Dawlat Zadran. It is the first time Dockrell, who recently captained Ireland at the ICC U19 Cricket World Cup, has claimed the award.

The left-arm spinner, who plays county cricket for English side Somerset and is in Sri Lanka as part of Ireland’s Twenty20 squad for the ICC World Twenty20, claimed 14 T20I wickets in the year, the most by any player in the window under observation, including Full Members, Associates and Affiliates with T20I status.

The delighted 20-year-old said upon winning the award: “It’s great to win such an award and especially to be following the footsteps of an esteemed group of players like William Porterfield and Ryan ten Doeschate and only at the age of 20, I feel very honoured. It’s been a great year of cricket with I-Cup, U19s and WCL Championship and now the WT20 and I’ve been learning a lot to take it into this tournament.

“It’s good to be setting high standards, and hopefully I will keep performing well for Ireland in the future.”

The Associate and Affiliate Cricketer of the Year Award was one of 11 individual prizes given at this year’s LG ICC Awards. It was announced former West Indies batsman Richie Richardson.