Getkate century leads Ireland Wolves to victory against Scotland A 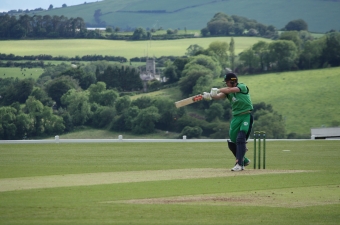 Getkate cuts the ball for four

OAK HILL, Wicklow – A maiden List A century from Shane Getkate led Ireland Wolves to victory over Scotland A in the second 50-over game between the two sides. Getkate put on a stand of 184 with captain, Harry Tector to take Ireland over the line by six wickets chasing 242 at Oak Hill Cricket Club today.

Earlier, Michael Leask had score a quite brilliant 110 for Scotland A off just 75 deliveries to guide Scotland to a competitive total of 242 – struggling from a score at one stage of 119-7. Leask’s innings included fourteen fours and three sixes as he marshalled the lower order brilliantly to mount the total.

Having won the toss and elected to bat, Scotland started positively through Michael English and Oli Hairs. However, wickets in consecutive overs from Irish openers Craig Young and Peter Chase accounted for both Scottish opening batsman. When Chris Wallace then received a snorter from Young, which he could only fend to third slip, Scotland had slipped to 45-3.

Chris McBride was trapped LBW by Shane Getkate. After a period of rebuilding, captain Dylan Budge fell caught behind down the legside off Getkate for a very stylish 40. Wickets for Ross Allan and Graham Kennedy reduced the Scottish to 119-7. However, Leask, who was ably assisted by Scott Cameron and Adrian Neill got the Scottish up to a respectable total.

The Wolves Chase is underway in Oakhill with 243 required for victory. Openers @JMccollum95 and @jack_tector have just gone out in pursuit.

The Irish innings started well with James McCollum starting aggressively, and he registered a number of early boundaries, with Jack Tector looking solid and accumulating at the other end. However, the two fell quickly for 36 and 12 respectively at the end of the first powerplay.

Then batting hero Leask looked to become bowling hero too as he claimed two quick wicket to dismiss both Lorcan Tucker and Graham Kennedy and leave the Wolves struggling at 59-4. Captain Harry Tector was joined by Shane Getkate and they went about rebuilding the home side’s innings. Steady progress was made until Getkate hoisted two massive sixes over mid-wicket and long on to get his innings moving.

The pair complemented each other’s batting well, Getkate showing brute force and ability to clear the ropes five times in his innings and be a constant danger to the Scottish attack, Tector meanwhile worked hard for his runs and compiled his innings beautifully. The duo’s 184-run stand was the highest partnership for any wicket for an Ireland Wolves side.

However, Getkate stole the show, with his brilliant maiden List A ton coming off 85 balls. He finished on 104 not out and Tector 64 not out as they chased down the target with five overs to spare.

“It was a great win for us. At the start, for Craig Young to come in again and carry on from yesterday was brilliant. To reduce them to 119-7 was great and you have to give credit to Leasky [Michael Leask], he put our bowlers under pressure and sometimes you just have to give credit where it’s due.”

“At 60-4, we were in a bit of a precarious position, but Shane Getkate was outstanding. To see the way he has gone on since the tour of Sri Lanka this winter has been excellent and I’m absolutely over the moon for him. I’ve had a bit of lean run of it myself for a few weeks so nice to get back in the runs and to get the team over the line. We’re now looking forward to tomorrow and hopefully go on and win the series.”

With the three-match 50-over series level at 1-1, the deciding game starts at 11am at the same venue on Friday.