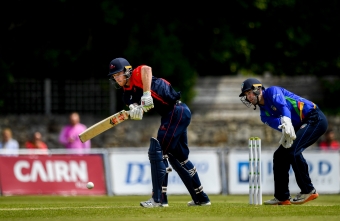 The Knights won the first T20 in convincing style

Shane Getkate starred as the Northern Knights raced to a comprehensive seven-wicket win against the North West Warriors in the opening game of the Test Triangle Inter-Provincial Festival at Pembroke.

Getkate took a career-best 5-8 and followed up with a quickfire 27 from 15 balls with the bat as the Knights chased down a well below par score of 78 from the Warriors on a glorious day in Dublin.

Earlier in the day, the Warriors won the toss and elected to bat on the same pitch used the previous night for the Leinster Lightning vs Middlesex game. However, from early on they found themselves in early trouble. After a few tight overs to begin, Mark Adair took a brilliant catch at mid-wicket to dismiss the dangerous Stuart Thompson for 9 off Graeme McCarter. Despite hitting a couple of early boundaries, Aaron Gillespie was unfortunate to find deep square leg to depart for 9.

That was Getkate’s first wicket, and he struck again to remove Andy McBrine caught at third man soon after. Progress was slow and it left the Warriors on 43-3 after 10 overs. However, the wickets began to tumble. David Rankin was bowled by James Cameron-Dow for 15, while a mix-up led to the quick demise of Graeme Kennedy to a run out. It wasn’t long after that both Ross Allen and Craig Young fell in similar fashion - caught trying to hit down the ground.

Harry Tector’s quicker ball was enough to tease Boyd Rankin out of his crease, while it was left to Shane Getkate to rattle through both Kyle Magee and Varun Chopra to complete his five-wicket haul and to polish off the Warriors innings for 78. Adam McDaid managed to survive a lot of the carnage to finish on 17 not out.

END OF INNINGS: The @NWCU_Warriors are bowled out for 78 in 19.2 overs. Adam McDaid finishes 17* and highest scorer of the innings. @ShaneGetkate finishes with the remarkable figures of 3.2-0-8-5.

Getkate then went out to open the batting with James McCollum, and the pair set about trying to chase down the total in the shortest amount of time possible. The two batted with great intent early in the powerplay, going at ten an over early on. Getkate found the rope four times plus hitting a massive six over square leg off Boyd Rankin in his cameo of 27. McCollum was more composed, opening his shoulders to score boundaries through the covers and over mid-wicket when he could.

Getkate fell to Boyd Rankin when top-edging a bouncer to the keeper, and the 6’8” Warriors paceman quickly accounted for Neil Rock in a fiery spell. Gary Wilson was stumped soon after off the bowling of McBrine to leave the Knights on 65-3. They still only needed 14 to win at this stage, and Harry Tector came in to join the already set James McCollum, and they knocked off the remaining runs with ease to win the game with ten overs to spare. James McCollum ending with a very tidy 42 not out, while Tector added 8 not out.