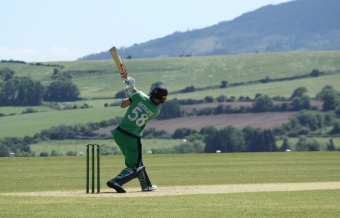 After winning the toss under grey, threatening skies, Wolves captain Harry Tector had no hesitation in sending the opposition into bat first. After a bright start by Scottish openers George Munsey (25 off 10 balls) and Oli Hairs (14 off 15 balls), the home side’s bowlers fought back with three quick wickets which helped to stem the run rate. Getkate (3-25) was in the thick of the action, after taking a running, low-down outfield catch to remove Munsey, he then came into the attack and removed Hairs and Scotland A skipper Dylan Budge for a duck.

The innings swayed back and forth as the visitors attempted to hit out, but the home side claimed regular wickets to ensure the batsmen did not take the game away.

With 160-170 being considered as par score, the Wolves would have been delighted by the innings change having restricted the Scots to 139-8 from their 20 overs. Craig Young was again in the wickets, claiming 2-31, but some of the most impressive bowling was by Mark Adair who took 1-14 from 4 overs.

By the time the Wolves turn came to bat, the skies above Oak Hill were blue and temperatures rising dramatically, however, the reply did not start well, with the Wolves losing Gareth Delany to a juggling catch off the first ball of the innings. The two young top-order batters, Nathan McGuire (34) and Oliver Metcalfe (10), put on an impressive 40-run stand to stabilise the innings and get the momentum back towards the Wolves, but then three wickets fell for 9 runs setting the Wolves back on their hells.

To the fore came the experienced duo of Getkate (49*) and captain Tector (28), whose 61-run stand seemed to wrestle the game back in the Wolves favour.

Getkate powered four big sixes in his innings, and he helped see out the win with the Wolves by four wickets and with seven balls to spare.

Speaking after the game, Getkate said:

“Winning the toss and sending them in seemed to work well for us yesterday, as it was a bit of a sticky wicket. I thought we bowled quite well with 160-170 being par here, so to restrict them to 139 today, I thought the bowlers did a great job. Mark Adair was brilliant with the ball, two [overs] upfront and two overs at the death, and Craig Young has started well all week.”

“I feel pretty confident with my game, with both bat and ball. At times as an all-rounder, maybe the bat fires more than the ball, but to get them both firing at the same time is very pleasing and it’s something I’ve been working on over the last couple of years. I’m just concentrating on enjoying my cricket and playing with freedom.

“I’ve felt in good nick all week, so I’m just trying to keep it as simple as I can. We had obviously played their bowlers in the 50-over series, so we kind of knew where they would try and bowl, so I was just focussing on backing myself and enjoying it as much as I can.”

Going into the last game tomorrow, he said:

“I think if you just look at the dimensions of the ground, there’s a big legside at one end - probably about an 80-metre hit - and the other end is short straight and to cow corner. So if we just play smart cricket, and stick to the basics like we did today, I think we’ll do well. I thought Harry was very good with his captaincy in the middle overs, he rotated his bowler very well, and we put on a good partnership in the middle which was crucial to getting the win.”

The Wolves lead the three-match T20 series 1-0 with one match to play, with that match starting at midday at the same venue tomorrow.