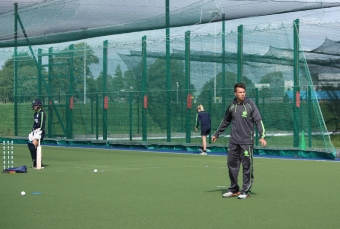 DUBLIN – Glenn Querl has been appointed as the Women’s Performance and Pathway Coach for Cricket Ireland – supporting Head Coach Ed Joyce in coaching of the senior national squad, taking a lead coaching role with the Shapoorji Pallonji Cricket Ireland Academy women’s squad, overseeing the girls talent pathway and continuing as Head Coach of the Scorchers.

Querl has coached across a range of sports since 2007 in Zimbabwe, South Africa, England and Ireland, and holds an ICC Cricket Coaching Level 3 Coach certificate, as well as formal cricket coaching qualifications in South Africa. He was appointed Scorchers Head Coach for the 2020 season, and has been a coaching consultant with the Ireland Women’s squad since mid-2020. In 2019, Querl also worked with the national underage boys and girls system.

Querl, who was Head Coach of Railway Union Cricket Club’s men’s section and captain of the first team in 2020, will continue to play at club level when time permits.

“I am delighted to be taking on the new Performance & Pathway role, as I have thoroughly enjoyed working with Ed and the performance squad over the last couple of months. I am excited about being part of the women’s High Performance set up and the pathway system and I look forward to the busy season ahead with the Super Series and upcoming internationals. This role will offer much needed support for Ed as the Head Coach and a brilliant opportunity to develop the academy and emerging talent in Irish women’s cricket.”

“Hopefully, my coaching experience at all different levels and in many parts of the world will stand me in good stead, as will my passion for the game.” “Glenn has proven himself to be a highly effective and engaging coach over the last six months with the senior performance squad, and I am delighted that he has been appointed to this crucial role. The progress and development of our female cricketers is an area we have required increased investment in, and it’s great to see that Cricket Ireland has responded to that need with a number of moves across the game.”

“2021 is set to be a big year with two world cup qualifying campaigns being the focal points. While it has been an intensely frustrating time for all over the last year seeing so many fixtures lost as a result of the pandemic, there is a new sense of optimism about the game that I hope can carry through to our performances when we return to the field.”

“Cricket Ireland has significantly increased its investment in the women’s game over recent years, even despite the pandemic. We recognised that the women’s game across Ireland required a major overhaul after the T20 World Cup in 2018 and have made a number of major changes since – not just in financial investment, but in contracts, and the coaching and support infrastructure around the women’s talent pathway.”

“Glenn’s appointment is our latest move to strengthen the women’s performance pathway, and he will work not only with Ed, but with Albert van der Merwe (National Talent Pathway Manager) and the Head Coaches of Provincial Union squads to create a more holistic approach to women’s cricket nationally.”

“While we put the finishing touches on a playing programme for the senior squad this year, it is equally important that we get the support structures beneath this squad right. I wish Glenn well, but I know he is as keen as anyone to get started and do his part in developing a vibrant and growing women’s game across Ireland.”