Graham Ford on His Role as Ireland’s New Head Coach 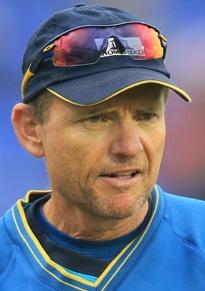 This week, Graham Ford officially took over at the helm of the Senior Men’s Team. We took some time with Graham to find out more about attracted him to the role.

At an extremely exciting and absolutely vital moment in Ireland’s cricketing history, 57 year old South African Graham Ford takes over as Ireland senior men’s Head Coach. Ford came across lots of Irish cricketers on the English county scene and had a pretty good working relationship with some of them. The time felt right to enter Irish cricket.

“To be honest I was slightly envious of the Irish cricketing scene, I thought there must be some sort of special ingredient that I was missing out on. It is definitely something that excited me and I’ve kept an eye on. Then the announcement of Test match status and all those factors combined and said this is where you want to be,” Ford says.

Ireland’s next coach is now in situ and looking forward to the challenges with the Ireland senior men’s team. “I love the country and the place and touring with Sri Lanka last year reminded me of that. When I was with Surrey, I probably got home to South Africa for four months or so, but with this I’m committing myself to being here year round and trying to get the very most out of it. I think that’s the way it has to be and with my family coming in and looking to get settled too, it’s exciting times.”

On the playing side, it is important Ireland are playing well and being competitive across the formats. “The players have fought so hard to get to Test match level and so has everybody in the system so when we do play Tests we really want to make a fist of it and make an impression.

“But the ODI World Cup qualifiers and the T20 World Cup Qualifiers being around the corner means that sharpening skills for both styles is going to be on our agendas fast. I guess there are going to be certain players who are better suited to play in one format rather than the other. So managing the workload of some of the senior players is something we’ll be monitoring.”

That was why it was vitally important for Ford to travel to the Inter-Continental Cup and Afghanistan ODI Series. Ford was very grateful to John Bracewell and Cricket Ireland for allowing him to do so. “With players all over the country and some in England, to get them all away on a tour like that and see how they prepare themselves and how they go about their business and handle pressure was vital.”

With Ireland taking part in the 50-over ICC World Cup Qualifiers in early 2018 and then moving on to the maiden Test match against Pakistan in May. This doesn’t leave much time for preparation, something that Ford acknowledges.

“I would’ve liked a bit longer before the Qualifiers because so much of when you start a new coaching role, that first period, is all about assessing and understanding what makes certain players tick and what they need to improve. The danger is if you dive in too quickly and try to make too many changes without trying to understand then you can bring people backwards rather than forwards.”

Ford is well aware of the age profile of the current squad and knows what fine cricketers they are. “A number of them are probably in the second half of their careers, which is sad in many ways. I’d hope the younger guys have learnt from the attitudes they have shown over many years and that similar attitudes will be coming through the system.

“Those players who have done so well to get Ireland into the Test arena will want to leave Ireland in a good place. There’s no denying the youngsters will have some pretty big boots to fill. Hopefully some of the senior players will buy into trying to nurture that younger talent because I think when it comes down to it, everyone just wants to see Irish cricket succeed,” Ford continued.

We’ve seen already this season how valuable it can be for someone like Jack Tector to have Ed Joyce batting at the other end and bringing him on. “That’s exactly it,” agrees Ford, “for a young guy making his debut or just starting out at the top level to have someone of Ed’s quality and experience at the other end is vital.”

Ford wasted no time in getting to know the Academy and underage coaches within the Cricket Ireland structures on taking up his role. It’s going to be a team effort to bring these youngsters through and he is hoping that everyone will buy in to it.

“So much of what happens at the top is dependent on the huge, huge amount of work that they have to do. Especially with players who are going to have less involvement with county cricket going forwards. The work that gets down at age group level, Academy level and at Wolves level is going to be the decider as to how well we do going on.”

In his short time in Ireland, Ford has noticed the quality of the coaches within the Cricket Ireland system and knows they will play a vital role in assisting his work with the senior team. Beyond the Academy and Wolves, this also includes the domestic scene and Ford is conscious of ensuring the standards of these competitions continue to improve over the next few years.

“With players getting less exposure to county cricket it is going to be crucial and we need it to be as close to international level as possible. Beefing up the domestic competitions is just as important as the Academy and the Wolves work,” Ford stresses.

Graham Ford travelled to Dubai and Sharjah in November and December 2017 as an observer while Ireland remained under the stewardship of John Bracewell. Now, however, they are fully under Ford’s control and he has laid out his coaching style.

“When you start coaching you have a particular style. I was young and energetic, I could make a real impact with my work ethic. I took over a struggling team but I managed to sign a gentleman by the name of Malcolm Marshall as the overseas pro. He was brilliant and great to sit with and chat to about cricket. He probably taught me a few lessons and when I went on to coach South Africa, he just said ‘Be Yourself’.

Over the twenty-five years of Ford’s coaching career he has developed and adapted his style, often dependent on the group in front of him. One aspect he has definitely learnt is to assess the needs of each group and adapt to those needs. “If you’ve got a very young group and a young captain, you might have to take more control and make a few more decisions,” he explains, “and with an experienced captain they can take a more hands-on approach.”

Modest to a fault, Ford puts his success down to other people and the players he has worked with over his time in coaching. When coaching the provincial under 23 side at home in South Africa, he had “some excellent players coming through, Jonty Rhodes being one of them. Due to the performances of that group, I got recognised for some higher roles but I’m the first to admit that I’ve been very fortunate along the way.”

One aspect of a coach’s or player’s role, no matter the sport, that goes without saying is a strong work ethic and Ford will not be found wanting. “Whatever group of players I’m working with it’s all about hard work and as the coach you’ve got to set the example. I’ve never really thought of it as hard work though, it’s just something I’ve wanted to do.”

The Graham Ford era begins with Ireland a new Full Member of the ICC and with their sights set on the historic first Men’s Test match against Pakistan on May 11th. Before then, there are the 50-over World Cup Qualifiers to contend with. With such a busy schedule to begin his reign, it’s probably just as well Ford enjoys putting in the hard yards.