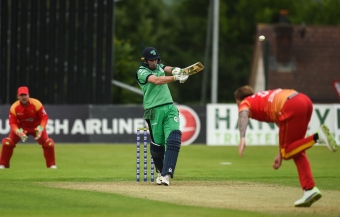 Andrew Balbirnie batting against Zimbabwe in 2019

DUBLIN – Cricket Ireland has today announced a new fixture schedule for Ireland Men’s eight-match multi-format series against Zimbabwe that was postponed a fortnight ago.

The original series dates had to be rescheduled when advice received by government and health authorities around quarantining requirements meant that the series could not go ahead as originally planned.

As part of the broader schedule, the Ireland Wolves will play a Zimbabwe XI in a 50-over match leading into the ODI series.

“There has been a great deal of behind-the-scenes work on pulling together a revised playing programme since the earlier series postponement, but thanks to the support of Provincial Unions and various hosting clubs, we have managed to create a schedule that meets the evolving requirements of health and sporting authorities, while ensuring we can still host these extremely important matches within the available window.”

“In order to meet quarantining requirements in both jurisdictions, the visiting side will spend the first 10 days of their tour training and playing in the Republic under bio-secure protocols, then the two sides can then move to Northern Ireland to complete the series. As a consequence of this change, we have had to flip the order of the T20I and ODI series, and we will see the return of international cricket at Clontarf for the first time since May 2019.”

“We would like to thank the numerous host venues for working with us on the rescheduling of this series so quickly, and look forward to welcoming the Zimbabwean team to our shores once more for what will be a highly competitive series.” “I think the squad reinforced their character, toughness and commitment during the South Africa series, but there were some lessons that the players took away - very simply, we have learnt that we need to improve in all departments of the game in both formats to compete consistently at the highest level.”

“Having access to decent training facilities for a week before the ODI series certainly helped, but the challenge in Ireland is always around getting the opportunity for preparation on good turf facilities.”

“As for the T20I series against the South Africans, while T20s can be a bit of a lottery, if you don’t start each innings well the challenge of the game grows dramatically. Brave and courageous options are required at times, but if the options don’t work it is hard to recover in the limited time available. Unfortunately, we found ourselves in that situation in each game – particularly in the early powerplays. It’s an area we need to continue to work on.”

Looking ahead to the Zimbabwean series, Ford said:

“Zimbabwe have played excellent cricket recently and have a lot of players in good form at the moment, however once again we will go into the series looking to improve in all departments and not over-complicating things.”

Will Ireland have a full squad to pick from?

“There are few minor niggles and injuries, which are being well managed by our head physio. We are pretty confident that all will be fit and available for the series.”

Watch the last One-Day International between Ireland and Zimbabwe at Stormont from July 2019.

See the full scorecard and highlight clips of the match here.