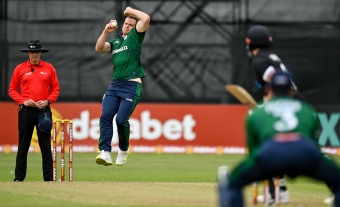 DUBLIN – Craig Young has been forced to withdraw from the Ireland Men’s squad set to play against South Africa in two T20 Internationals this week, with Graham Hume brought in as a replacement.

The change came on the eve of the squad’s departure to Bristol for the series with the squad flying out of Dublin this afternoon.

Hume, 31, was handed a central retainer contract in May and made his one-day international debut this month against New Zealand.


Tickets are available to buy online at:

• For the South Africa series: www.eticketing.co.uk/glosccc/
• For the Afghanistan series: www.cricketireland.ie/tickets.