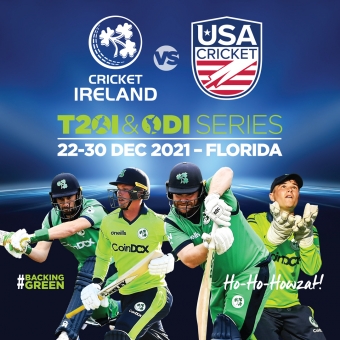 It will be a truly historic festive season this year with Ireland and USA men’s squads set to take part in a five-match multi-format series - the first-ever time a Full Member has played a series against USA on American soil. Here is what you need to know about the Dafabet USA v Ireland Men’s International Series 2021.

The series will consist of two T20 internationals and three one-day internationals from 22 to 30 December, with all matches to be played at Central Broward Regional Park Stadium in Lauderhill, Florida.

The venue is only a 30-minute drive north from Miami and has hosted high-profile cricket events in the past. In 2008, Central Broward hosted the MAQ T20 international cricket tournament, an event that featured world superstars such as Javed Miandad, Richie Richardson and Mohammed Azharuddin.

When Irish eyes are…

Ireland will be looking to bounce back from a disappointing Men’s T20 World Cup in October. After beating Netherlands heavily, Ireland was well beaten by Sri Lanka and Namibia in the First Round Stage and failed to progress to the Super 12 stage. As a result, Ireland must now qualify for the 2022 Men’s T20 World Cup in Australia.

“The failed T20 World Cup campaign has placed an added sense of urgency to both this tour and the upcoming series in the West Indies for Ireland. “We had hoped that we would have avoided the need to qualify for next year’s T20 World Cup through advancing to the Super 12 stage of the last tournament, but our early exit means that our transition and succession planning horizons have been shortened somewhat,” chair of selectors Andrew White told BBC Sport.

The most high-profile omission from the current tour is Kevin O’Brien. Ireland’s most-capped player had formed an opening partnership with Paul Stirling at the top of the T20I side, but scored only 39 runs at an average of 13 during the failed World Cup campaign.

It has been confirmed that Stirling will open the batting in T20Is alongside captain Andrew Balbirnie, with a middle-order shake-up that will aim to deal with the side’s lack of boundary-striking in the middle order (at the recent T20 World Cup, Irish batters 6-11 in the order combined to score only 37 runs at an average of 4.1 per player). As part of this, William McClintock and Shane Getkate have been recalled to boost the attack, while it was foreshadowed that Gareth Delany would likely move to three. A recent positive Covid test has ruled Delany out of the US series, but he should be able to return for the West Indies leg of the tour.
. With the ball, Curtis Campher will look to impress again, as he did at the T20 World Cup with six wickets, including a performance that has quickly gone down in Irish cricket folklore. Playing against Netherlands, the match was delicately poised with Men in Orange at 51-2 in the 10th over. Campher proceeded to tear apart the Dutch batting line-up with a remarkable four wickets in consecutive balls.

Mark Adair will also be sure to feature prominently again after claiming five wickets at the T20 World Cup.

Getkate, too, adds some bowling spice and adds more than just batting strength - he was second-highest wicket-taker against Zimbabwe in the home summer in Ireland and has the ability to make key breakthroughs when his side needs it.

From the Land of the Brave

For the home team, there have been a few last-minute Covid-related complications with their squads, but will look to prove themselves during what is one of the biggest events in their history.

“We hope that this series helps to showcase the potential in American cricket with it being the first ever home series of international matches against a Full Member,” said CEO Iain Higgins to the USA Cricket website. “This announcement also sends a signal to the international cricket community that cricket in the USA is moving in a very positive direction and that we have aspirations to compete against the best teams in the world on an increasingly regular basis on home soil.”

Monank Patel has been named captain of the USA team for this series and will be a threat that the Irish bowlers must take seriously. In September, Patel opened up the Oman Tri-Nations series by hitting 100 off 114 balls in a series-opening defeat to Nepal, and then went on to end the series by racking up 56 from 58 balls as his team went down to Oman.

Unfortunately the exciting wicket-keeper/batter Jaskaran Malhotra - who smacked 16 sixes on the way to an innings of 173 from 124 balls during a September victory over Papua New Guinea - is out of the series.

These late Covid-enforced changes (Malhotra, Karima Gore and Aaron Jones have all been ruled out of the T20I series) have opened up opportunities for a number of emerging talented players to receive a call up, and Marty Kain - who was already named in the T20I squad - has also been added to the ODI squad. At the head of the bowling class for the USA is Saurabh Netravalkar, an Ivy League graduate who has previously captained the team. Netravalkar was pivotal when the USA beat Nepal by six wickets during the Oman Tri-Nations event, taking 4-29 to help his team hold Nepal to a score of 174 all out.