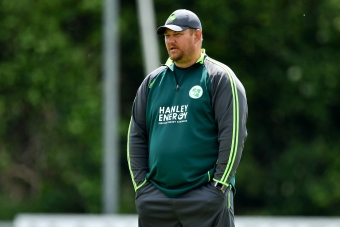 DUBLIN - Ireland Women’s Head Coach Aaron Hamilton is set to leave his role and return home to his native Australia after four years leading the national side through a period of growth and transition.

Hamilton’s tenure saw the women’s team successfully qualify for two ICC Women’s T20 World Cups, winning the 2016 Qualifier in an exciting last-ball encounter in Thailand. He also took over responsibility for the women’s Academy, when the function was split out to form a separate men’s and women’s Academy.

“I relocated here from Australia in 2015 to take on what was going to be a major challenge, but after 17 years working in different sporting and cricket environments, I saw the role as a chance to push both myself and Irish cricket forward. It was obvious that the sport was entering a new phase, particularly with the start of the Toyota Super 3s in 2015 and the Academy only being a couple of years old.”

“It has been a highly enjoyable time and a great squad of players to work with. While qualifying for two T20 world cups were definitely highlights, what has been just as satisfying has been to watch the emergence of some great young talent, as well as the recent introduction of first-ever part-time professional contracts for six of our players. These alone allow me to exit the role satisfied that I have left the squad with an exciting platform to build on.”

“My thanks to Cricket Ireland for the opportunity it gave me, and to a talented and eager group of players that will no doubt grow further and compete with the best in years to come.”

“There is no shying away from the fact that Irish women’s cricket is a few years behind the major sides in development, but there is no reason that - with the right support and investment - the Ireland Women’s cricket team can’t become a competitive force in the sport.”

Hamilton met with Cricket Ireland officials to discuss outcomes from a post-World Cup review last week and both sides mutually agreed to end to the Head Coach’s contract early.

“We would like to thank Aaron for his work and commitment to the role over the last four years. His time in the role has straddled a period of growth and transition for the sport and Aaron has overseen his duties always with an eye to what was important for the long-term success of the squad.”

“We wish him and his family well as they return home, and he can be proud in the knowledge that he has made an important contribution to the growth of the sport in Ireland.”

“Aaron was recruited as our first full-time head coach for the women’s international squad and has been a key component of Cricket Ireland’s move to raise the profile, standards and competitiveness of the Ireland Women’s team over the last four years. The role has been a challenging one, and Aaron has committed wholeheartedly to achieve what was required of him. His unflappable nature and commitment to developing young talent has been a key feature of this time in the role.”

“He has gained many admirers within Irish cricket over his time, and two world cup appearances during his time are a legacy he can be pleased to take away from his time. We wish him well for his next step.”

Cricket Ireland will begin the search for a new Ireland Women’s Head Coach shortly, and will put interim arrangements in place during the lead-up to the Zimbabwe series in early July. Further recommendations from the post-World Cup review will be implemented in due course.