Harry Tector: “When we stand up to these teams we are capable of going blow-for-blow with them” 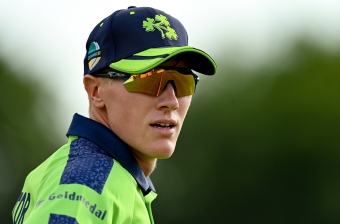 BRISTOL – In-form Irish batter Harry Tector is upbeat about the summer so far for Ireland despite the ‘mixed bag’ of results and was speaking about his recent contract offer to play in two white-ball tournaments in the Caribbean coming up in the next month.

Speaking from the hotel in Bristol, Tector was talking about the home summer to date:

“It’s been a mixed bag in terms of results, but the way we are playing is certainly improving – I think that’s the main takeaway of the summer so far. The brand of cricket we are playing means that sometimes we will be bowled out for a low score, but that’s what you see with pretty much most international teams. I think you have to accept that if you’re willing to get those big scores, and thankfully we’re seeing that more and more, that’s what we’re looking to build on, particularly as a batting unit going to a T20 World Cup in October.”

Would you describe that approach as one of ‘no fear’?

“I think that’s a fair assessment – I think we’ve shown that when we stand up to these teams, we are capable of going blow-for-blow with them, and it feels that way within the group.

“We have a good team behind us helping move in this direction - Heinrich [Malan], Eagy [Ryan Eagleson] and Wils [Gary Wilson] as specialist coaches have been getting us to think more about our T20 game. The belief is there that we can beat these big teams, and not to get nervous about any team we play. We go out there and want to win, we expect to win, and I guess that’s where it has been a bit disappointing this summer as we have got so close so many times.

“The flip side of that is that we know we’re not that far away, and we know we have better cricket in us as well, which is what is so exciting. I think that ‘no fear’ mentality is key – not just with the bat but with the ball as well, and we’ve done that in part this summer, enough to give that belief to the squad that we can beat these big teams. It’s certainly something we’re looking to bring into this week in Bristol.”

Has the team that faced South Africa in 2021 changed to the one that will take them on this week?

“It’s probably not that different personnel-wise, but it’s certainly different in how we’re trying to play the game and trying to create more clarity around what we’re trying to achieve. It’s not just about this week, though, it’s all about building towards the World Cup in October.”

And what are you looking forward to most about the Caribbean tournaments you’re set to join later this month?

“I’m mostly looking forward to playing with some great players in a different environment and in different conditions – and it will be valuable experience to gain before the World Cup. While it’s an amazing opportunity for me to improve my game, I think the more Irish players that can get into these leagues the better, because it can only stand to our benefit to be learning in those different environments. To learn from other players and other coaches will be greatly beneficial as it will allow us to bring back knowledge for the Irish squad going forward.”


Tickets are available to buy online at:

• For the South Africa series: www.eticketing.co.uk/glosccc/
• For the Afghanistan series: www.cricketireland.ie/tickets.