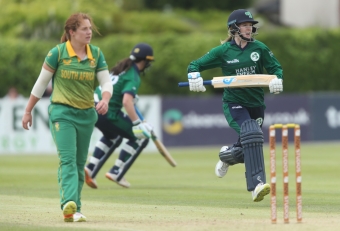 A much-improved batting display by Ireland, but South Africa were too strong on the day

DUBLIN - South Africa pulled off a comprehensive win over a much-improved Ireland in the second One-Day International of The HBV Studios International Women’s Cricket Series, chasing down 214 with more than 11 overs to spare.

Andrie Steyn and Lara Goodall starred with the bat for the Proteas, putting on an unbeaten 165 for the second wicket – South Africa’s sixth-highest partnership in women’s ODIs – to take the visitors home.

Sune Luus won the toss and chose to bowl first as South Africa looked to build on their sensational win in the first ODI, when they bowled Ireland out for 69. Shabnim Ismail, electric in the first ODI, impressed once again, bowling Leah Paul in the second over for 2. Gaby Lewis and Rachel Delaney were then watchful against the new-ball pair of Ismail and Ayabonga Khaka, with just eight runs coming off the first eight overs.

A change in bowling saw Lewis find her first boundary, with Nadine de Klerk driven through the covers for four. But de Klerk struck from the first ball of her third over, finding Delaney’s outside edge to gift keeper Trisha Chetty with a catch.

Mary Waldron fell in the next over, but Lewis continued to score, and greeted the returning Ismail in the 17th over with a pull for four. But the end of the 22nd over saw another Irish wicket fall, with Sarah Forbes dismissed for 9 after a direct hit from Laura Wolvaardt. From 66-4, Ireland underwent a rebuild as Sophie MacMahon joined Lewis out in the middle. MacMahon showed intent from the get-go, racing to 31 off 27 while Lewis moved to the fourth half-century of her ODI career off 70 balls.

Lewis and MacMahon’s 69-run stand ended in the 33rd over, with Luus removing her Irish counterpart for 59, and de Klerk bowled MacMahon six deliveries later to leave Ireland with two new batters at the crease.

But there was still room for another key contribution in the innings, with Georgina Dempsey striking 45 not out off 54 balls, the highest score of her international career so far. For South Africa, Ismail finished with 3-31, displaying the value of her extra pace once again.

South Africa were on top of the chase from the very start of their innings, with 42 runs delivered from the first five overs. But Ireland landed a breakthrough in the ninth over, when Dempsey continued on from her fine work with the bat to remove Wolvaardt for 27, with the right-hander chipping the ball to Paul at midwicket.

But that brought the in-form Goodall to the crease, with the left-hander having top-scored for her side in their three previous matches in the series.

Dempsey could well have had Goodall gone on 10, but the fielder at midwicket failed to hold on – and it proved costly. Goodall went on to strike eight boundaries as she advanced to the highest score of her international career.

Ireland used eight bowlers in search for a wicket, but the second one never came. One bright spot was debutant Alana Dalzell, who conceded 15 runs from four overs to make herself the most economical bowler on display for the hosts.

The next ODI, also part of the ICC Women’s Championship, will take place at the same venue on Friday, 17 June.