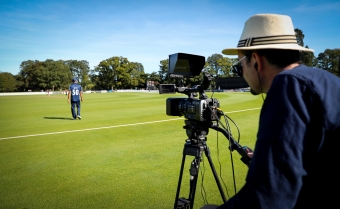 The 2020 season has seen the roll-out of a new online match centre experience for fans, featuring livescoring, match clips and real-time match statistics. As part of the package, a new livestream service has also been introduced, with select matches receiving an ‘enhanced service’, which will feature multiple cameras and expert commentary.

HBV Studios has been engaged to deliver four fixtures from across men’s, women’s and club cricket in matches that will showcase Irish domestic cricket to the world. The matches are:

“Despite the challenges of the last six months, we are pleased to not only have supported a return-to-play for cricket across Ireland, but we have been able to introduce a number of new fan enhancements that will showcase Irish cricket to the world. The new match centre, with integrated livescoring and highlight clips is a great leap forward with raising the profile of our game, while the livestream service has not only meant more games – men’s and women’s – being seen across the globe, but for local supporters it has taken on greater prominence during a time when many of our games are unable to allow spectators at the grounds.”

“These enhanced livestream matches have been chosen to help showcase many aspects of our domestic game – men’s, women’s and club cricket. To be able to bring our premier All-Ireland T20 club cup competition decider, a T20 match from the beautiful Mardyke in Cork, and the final round matches in both the women’s Super Series and men’s Test Triangle Inter-Provincial 50-over Cup competition should provide a great representation of Irish domestic cricket for fans to enjoy.” “Cricket has been a lifelong passion, having been involved in club cricket since 1976 with my club YMCA. In recent years I’ve been fortunate to be able to combine business and personal passion through live streaming. We started back in 2016 and have really seen the interest and audiences grow particularly through coverage of the T20 format.”

“Personally, the Inter-Provincial T20 Festival at Pembroke in 2018 was a particular highlight - four teams in one ground over three days. Great memories of the Munster Reds taking the plaudits in a tight game versus Leinster Lightning on the last day.”

“This year the Super Series between the Typhoons and Scorchers has shown that the quality has improved enormously with higher scores both posted and chased. Having been at a number of the games, one of the great improvements is the quality and increased strike rate. And there are also a number of fantastic young seam bowlers coming through the ranks. We are really looking forward to showcasing this talent at the end of September.”

“Live streaming is a great way to show the wider public just how exceptionally good the quality of the domestic game is in Ireland - not only to the general Irish viewer but to a world audience. HBV Studios has invested heavily in equipment and facilities over the last year – with our 12-person team, new cameras, enhanced editing, graphics and quality replay system, combined with our expert commentary team - we hope we can add to the viewers experience with a high quality professional service.”

While the expert commentary team will be announced ahead of each game, the team confirmed for the first match on 8 September will include RTE Sport’s John Kenny, former Irish captain Alan Lewis and Andrew Leonard who has commentated on cricket around the world, including in Ireland, Nepal, USA and the UAE.

Specific details and livestream links for each match will be made available on Cricket Ireland’s website and social media channels closer to each match day.