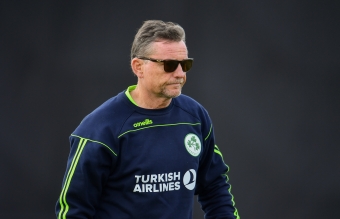 PRETORIA, South Africa – Ireland Men’s Head Coach Graham Ford will return to Dublin this week as part of a rehabilitation plan after sustaining an injury that will inhibit him from being fully involved in the Wolves tour.

Ford, who was due to fulfil an Assistant Coach role during the Ireland Wolves series against Namibia, had travelled to South Africa ahead of the squad.

The initial injury, resulting from a slip accident at Ford’s home in Dublin, was sustained on the eve of his flight to South Africa. Initially the injury appeared to be no more than bruising and a possible strain, however, after arriving in Durban, Ford attended a local doctor who ordered an x-ray where the extent of the injury was revealed, showing a fractured vertebrae and three broken ribs.

The injury will require a recovery period during which Ford will be unable to participate in physical training with the Wolves squad, so medical staff have recommended he return home to Dublin for rehabilitation.

The Wolves’ coaching duties will be covered by Wolves Head Coach Pete Johnston and Assistant Coach Ryan Eagleson, while National Talent Pathway Manager Albert van der Merwe – who was initially scheduled to partially support the tour - will now stay with the squad for the entire tour. The Ireland Wolves is a second-tier international men’s team that was created in 2017 to bridge the gap between domestic first class and international cricket. The squad has played full-series’ against Bangladesh A (both home and away), toured Sri Lanka in 2019 and recorded two victories over visiting senior sides – Bangladesh and Zimbabwe - in 2019.

The squads for the current tour are: