Heartbreak for Ireland as Afghanistan prevail in tight encounter 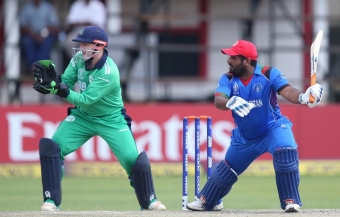 Mohammad Shahzad was awarded player of the match

Afghanistan joined West Indies as the two sides who will progress to the ICC Cricket World Cup in 2019, after a hard-fought win over Ireland by five wickets in Harare today.

Under grey skies, Ireland won the toss and elected to bat first. Graham Ford’s side did not make any changes from the side that beat Scotland on Sunday.

Ireland Captain William Porterfield and fellow opener Paul Stirling adopted a cautious approach to the opening stages, ticking the scoreboard over while ensuring no loss of early wickets. The pair put on 53 runs without loss in 15 overs, before Porterfield whipped a ball off his pads straight to the mid-wicket fieldsman and was dismissed for 20 (45 balls; 2 x fours).

Last match centurion Andrew Balbirnie (11 runs off 33 balls) went soon after, becoming the first victim of the day for world cricket’s current best ODI bowler Rashid Khan (3-40 off 10 overs). Khan started the day with 15 wickets for the tournament, and demonstrated his class with an excellent spell of bowling that at times seemed unplayable on a spin-friendly pitch. Niall O’Brien, representing his country for the 100th time today in ODIs, looked busy early, playing several text-book sweep shots as he and Stirling lifted the run rate. The pair put on 44 runs in eight overs, during which Stirling brought up his half-century off 77 balls.

Stirling has shown a recent liking to the Afghanistan bowlers with this being the third innings in a row against the Afghans that he had passed the 50-mark (having made scores of 82 and 101 in December 2017). However with the score on 121-3 there was a mix-up between O’Brien and Stirling off a mis-field and Stirling (55 runs off 87 balls; 3 x fours, 1 x six) was run out at the non-strikers end.

Niall O’Brien looked to push on, but with the score on 131 he played an expansive shot off a half-volley only to pick out the cover fieldsman - dismissed for 36 (41 balls; 4 x fours, 1 x six).

Kevin O’Brien replaced his brother and began a counter-attacking innings, eventually being dismissed for 41 (37 balls; 3 x fours, 1 x six). The younger O’Brien was the only top order batsman to score at more than a run-a-ball on what was a slow, low-bouncing pitch. O’Brien’s dismissal, bowled by Rashid Khan, was the bowlers 99th ODI career wicket (taken at a remarkable average of 14 runs apiece).

The final overs saw Ireland lift the run rate marginally, however wickets fell at regular intervals and they finished on 209-7 off 50 overs.

For the Afghans, their employment of a spin-led attack paid dividends, containing the Ireland batsmen with star bowler Khan ably supported by Mohammad Nabi (1-48 off 9 overs) and economical bowling by Sharafuddin Ashraf (0-18 off 6 overs).

Needing a run rate of just over four runs per over for victory, Afghanistan started sprightly, with the big-hitting Mohammad Shahzad – after first giving Barry McCarthy (1-57 off 9.1 overs) a difficult caught-and-bowled chance – took 12 runs off the third over and signalled his intent to put early pressure on the bowlers.

Shahzad continued his assault on the bowling and quickly brought up for half-century at better than a run-a-ball. However, soon after celebrating his milestone, he tried one slog too many and holed out at deep long-on from the bowling of Simi Singh for 54 (50 balls; 6 x fours, 2 x sixes). Gulbadin Naib (45 runs off 91 balls; 3 x fours) and Rahmat Shah (12 runs off 23 balls; 1 x four) pushed the scoring along before Singh struck again in the 26th over dismissing Shah, followed by Boyd Rankin who claimed Naib two overs later giving Ireland a glimpse of a chance at 117-3. Rankin – playing in his 50th ODI - bowled with pace and bounce on an increasingly unresponsive pitch and often looked the most likely bowler to make a breakthrough.

The momentum of the game seemed to swing, led by excellent spin bowling by Singh (3-30 off 10 overs) and Andy McBrine (0-38 off 10 overs), at one stage restricting the batting side to 69 runs off the 24 overs through the middle of the innings.

The Afghans looked nervous, losing Mohammad Nabi for 12, and by the 42nd over the asking rate passed six runs-per-over for the first time.

The last eight overs of the innings were a tense, seesawing battle. The Afghans led by their brave Captain Asghar Stanikzai (39* runs off 29 balls; 4 x fours, 1 x six) who had returned to the side after a bout of appendicitis, were always in sight of the target and took their opportunities well. Stanikzai and Najibullah Zadran (17* runs off 15 balls; 1 x six) kept their heads and saw out the task with five balls to spare.

Mohammad Shahzad was awarded player of the match for his innings of 54.

“We were probably 25 runs short. Then again, in games like this we can’t fault anyone. We had opportunities but we lost three games. We had some key moments but we could not take them. We now get back for some rest and recuperation.”

The final of the tournament between West Indies and Afghanistan starts at 7.30am (GMT), Sunday 25 March 2018.

The Ireland Men’s team now head home to rest after a tour that began six weeks ago. The team will then begin preparations for a big summer of cricket ahead of them, with its first ever Test Match in May, and then playing host to India and today’s victor, Afghanistan, in June and August respectively.

Tickets are now on sale for these home matches from Ticketmaster.