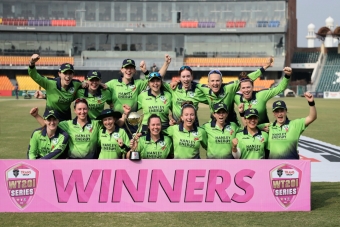 LAHORE, Pakistan – A commanding win over Pakistan in the final T20I in Lahore saw Ireland clinch a historic first T20I series victory over Pakistan, with a brilliant half-century from Gaby Lewis setting up the triumph.

Ireland bowled Pakistan out for 133 after setting them 168, finishing their innings just four wickets down.

After winning the toss and electing to bat, Amy Hunter and Lewis vindicated Laura Delany’s decision straight away, putting on a huge partnership of 110 for the first wicket.

Four boundaries off the first three overs signalled Ireland’s intent right from the start, Lewis the main aggressor, bludgeoning a slog-sweep off Nida Dar over the rope for the first six of the match. She followed up with a four off the last ball of Dar’s over before smashing two more boundaries off the fourth.

Hunter took a back seat early in her innings to let Lewis occupy centre stage. After they smashed 56 runs from the powerplay, Lewis reached her fifty in style, reverse sweeping a full ball from Fatima Sana through third man for four, bringing up her ninth T20I half-century off 26 balls.

With the hundred up for Ireland in the 12th over, a big total looked on the cards. Hunter played a good supporting innings before she was bowled by Nashra Sandhu for a 35-ball 40, bringing Orla Prendergast to the crease with licence to swing. She attacked straight away, hitting a six off her second ball over long-on.

Lewis was well set, continuing to hit boundaries, and advancing past 70 before she was caught at mid-on by Aliya Riaz, unable to get enough height on the ball from Sana to clear the fielder. She finished her innings on 71 off 46 with 12 boundaries.

Despite the loss of Lewis and then of Eimear Richardson, Prendergast continued to push Ireland up towards 170. She crunched ten off the final over to set Pakistan 168 to win and send Ireland into the break full of confidence. Pakistan would have to pull off their highest-ever T20I chase to stop Ireland from claiming a historic win.

A tight start from the bowlers made it an even tougher task with Jane Maguire and Prendergast only conceding eight off the first two overs before Maguire made the breakthrough, dismissing Sidra Ameen in the third over.

Pakistan looked to take the chase deep, accumulating off the rest of the powerplay to take their total to 41. A big breakthrough for Ireland came in the seventh over, however, Arlene Kelly delivering a clever slower ball to outsmart Muneeba Ali.

With some nerves flying around for Ireland, the final two overs before the drinks break went for 25 as Pakistan continued to keep themselves in the run chase. Javeria Khan was the key, reaching fifty off 36 balls before Maguire took the crucial wicket to steady Irish hearts. Khan got an inside edge on a ball she was looking to cut, her stumps disturbed. The wicket brought the dangerous Dar to the crease, with Pakistan’s chase largely resting on her wicket.

A four and a six by Dar from Cara Murray showed the match was still very much in the balance with Pakistan needing another 80 runs from the last eight, a target possible with Bismah Maroof and Dar at the crease. But a run out from Richardson to dismiss Maroof opened the floodgates for Ireland, and a steady flow of wickets followed.

Two wickets in each of the last two overs from Kelly and Delany respectively, both finishing with three wickets apiece, sealed a comfortable win by 34 runs for Ireland and gave Ed Joyce’s side a historic series win. The first time Ireland women have won a series against Pakistan, their first series win overseas against a Test playing nation and the first for any Ireland side in Pakistan.