Historic win for Ireland Women as Prendergast and Lewis shine 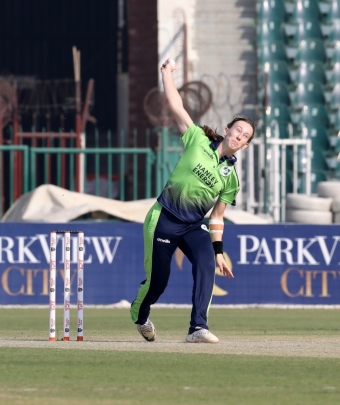 LAHORE – A sensational all-round performance from Orla Prendergast and a composed half-century from Gaby Lewis gave Ireland Women a six-wicket victory in the first T20I against Pakistan, their first win of the tour.

Despite a fighting half-century from Nida Dar, Bismah Maroof’s side couldn’t stop Ireland from chasing down 136 with eight balls to spare, giving them a famous victory at the Gaddafi Stadium in Lahore.

There was some surprise at the start of the match that Sidra Ameen wasn’t in the Pakistan XI: she scored 277 runs in the three-ODI series and was only dismissed once. Ameen was replaced in the side by Javeria Khan.

The day belonged to Player of the Match Prendergast, who took her first wicket with just her third delivery when opener Muneeba Ali went for a big drive but edged behind to the keeper. She was back in the dugout before Pakistan had scored a run. Prendergast followed that up by taking the big wicket of Bismah Maroof in the fifth over, a superb catch low to the ground by Louise Little at mid-on completing the dismissal.

Captain Laura Delany opted to bowl Prendergast out early following the powerplay, and she finished off in style, sending down a wicket maiden and shattering Javeria’s stumps. She finished with career-best figures of 3-10, having broken the back of Pakistan’s batting line-up early on, and give Ireland a brilliant chance of victory.

With the scoring almost completely dried up for Pakistan early in the innings, Dar looked to counterattack, scoring a rapid half-century to give her side something to defend. She dispatched Cara Murray for a six in her second over before slashing a powerful four off Delany. The Ireland skipper had her revenge, dismissing Dar lbw with two overs left in the innings, but not before she had made 61 in 43 balls.

Set 136 for victory, Ireland would have been feeling confident going into the chase. Nerves may have heightened when Amy Hunter was dismissed for one, but Prendergast at No.3, made an impact in the powerplay once again, starting with a four off the first ball she faced.

She smashed five boundaries in her innings including a six off Dar, before she was stumped on 39 off 25. The all-rounder, however, had done her job, reducing the equation to a run-a-ball off the last 12 overs.

Gaby Lewis then took over leading the chase, scoring her eighth T20I half-century off 40 balls. It was a classy knock, anchoring the innings and seeing her side home. There was some late drama which would have set Ireland’s hearts racing: Eimear Richardson was dismissed by Ghulam Fatima in the 16th over with 21 still needed for the win. But Lewis showed her composure, calmly hitting three boundaries off the last seven balls to secure the win, finishing with 69* off 54 deliveries.

A deserved victory for Ireland, their first win over Pakistan since 2014, and the first for any Irish side in Pakistan. They go 1-0 up in the three-match T20I series, with the second match set to be played on Monday, November 14.

Ireland Women’s tour of Pakistan is being livestreamed on the Pakistan Cricket Board YouTube Channel.