History: The links between Irish and South African cricket 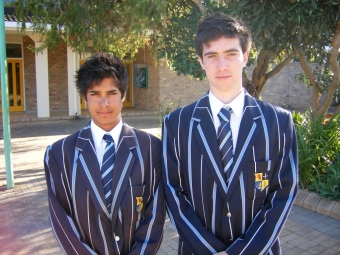 South Africa and Ireland have had close links on the cricket field all the way back to the 19th Century.

In colonial times, many Irishmen and women made their way there and some contributed greatly to the sport in their new home. Clem Johnson from Kildare was a major figure in Leinster cricket and won 12 Ireland caps before he fell ill and, on medical advice, emigrated to Transvaal. His health rallied and he resumed playing cricket. In 1896, alongside Dubliner Reggie Poore, he played for South Africa against England – who featured another Dub, Tim O’Brien. It was the most Irishmen seen on a Test field together until Ireland played Pakistan on this ground three years ago.

South Africa and Ireland have never played a Test, or a T20i, but played five ODIs, all won by SA. Their first meeting was at the 2007 World Cup in Guyana, a Super Eights game that was a comfortable win for Graeme Smith’s side.

Andrew White in particular was delighted that Boyd Rankin removed AB de Villiers third ball for 0. The future legend spent some time as a pro with Carrickfergus in 2004 and in one six-day spell made 233 and 208*, the latter against White’s Instonians.  So there was much relief around the NCU when he had to cut his visit short to take up his first international call-up.

De Villiers is not the only man from the Rainbow Nation to make the journey north for a summer’s sport. Andre Botha is one of Ireland’s greatest players having first arrived here in 1994 from Roodeport as an 18-year old with very little English. A stellar career in Dublin saw him capped in 2001 and he won 142 in all before he retired after the 2011 World Cup.

Botha’s coach at the 2007 World Cup was Adrian Birrell, credited with Ireland’s cricketing rebirth, and later assistant coach of South Africa. ‘Boatsy’ was followed into Ireland colours by several men who made their lives here and made major contributions, including John Anderson, James Cameron-Dow, Max Sorensen and Albert van der Merwe.

And it’s not all one-way – John Mooney spent an Irish winter playing in South Africa, while Cricket Leinster have been operating an exchange programme for Transition Year students since 2003. Over the years the likes of George Dockrell, Lorcan Tucker, Barry McCarthy, David Delany and Andrew Balbirnie have benefited from playing in Muir College in Uitenhage.

The games between the nations go right back to 1894 – the sides drew a three-day match at Rathmines, before the South Africans beat the strongest club sides, Trinity and North of Ireland, in two-day games. In all they played five times before the First World War, Ireland winning once and South Africa three times. That win, at the Mardyke in 1904, saw Tom Ross set a new record – only beaten once since – with 9-28.

Ireland’s only other win, at Ormeau in 1947, relied on another brilliant bowler. Jimmy Boucher took 7-37 in a six-wicket win. South Africa had two big wins in 1951 and did not visit again until 1998. Since then the nations have cemented their relationship and Ireland have hosted A-team and Academy tours that saw the likes of Andre Nel, Wayne Parnell, Rory Kleinveldt and new captain Temba Bavuma progress their careers.

Ireland have also had development visits to South Africa and it was on one such that the Irish hierarchy first came across Curtis Campher, the all-rounder who made a big impact when he first played against England in 2020. He’s not the only man born on that beautiful continent in Ireland’s tent today, but he’s best placed to show his old pals what they’re missing.

*Ger Siggins writes about cricket for the Sunday Independent