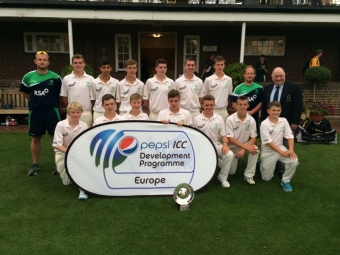 Ireland’s complete domination of European competition has seen tournament victories for the Women and Under 15 boys, which followed wins for both the Under 17 and 19 boys in the ICC Europe Challenge Series. In addition, the Under 17 girls beat Scotland in a three game T20 competition earlier this summer.

Cricket Ireland Performance Director Richard Holdsworth, as a former ICC European Regional Manager, knows the importance of success at these tournaments if Ireland is to achieve its quest for Test status by 2020.

“In the first instance, I’m enormously proud of all the players and coaches for this terrific achievement. There has been a tremendous amount of planning and hard work behind the scenes in preparing all of our players for this year’s European Championships at youth level and the women’s seniors. It’s enormously gratifying to see our pathway programme improving through better support services for the athletes, more and better coaching and training opportunities, while more fixtures have led to some excellent performances by these players. However, Holdsworth was clear to stress that no-one should rest on their laurels and that the real work was just beginning. “Under our National Academy, we have supported players in our system better than ever before, and our youth programmes have been improved tremendously with some outstanding coaching.  It is always good to benchmark ourselves alongside our European colleagues, but we must continue to challenge our players and ensure they are ready to compete on the world stage and be even better.  We start preparations for an under 19 World Cup campaign this winter and that will be a key focus for many of our top young players over the next 18 months.”

Ireland’s most recent success came at the weekend with six wins out of six for Ireland Women as they dominated the ICC Europe T20 Championships. During their emphatic 117 run win against traditional rivals Scotland yesterday, Cecelia Joyce became the second Irish woman to score an international T20 century, and was clearly delighted at passing the personal landmark. “It was my first century for Ireland, so a very special day and I couldn’t be happier than to do it with Trent (Johnston) still here. I think he will have seen during this competition more than ever before how much we have moved on under him as coach.”

Johnston was quick to pay tribute to his squad who dominated the tournament. “I can’t praise the squad and management enough. We played fantastic cricket for the week and to finish with Cecelia Joyce getting a century, sharing that 160 stand with Kate McKenna was truly outstanding. This tournament has been great preparation for the South Africa series next month.”