How to get behind the Boys in Green 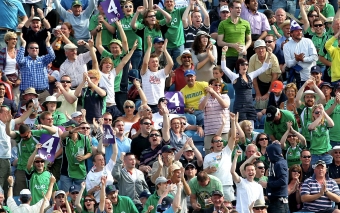 2012 has seen a marquee year for Irish Sport. All of Ireland’s superb Olympians and Paralympians doing the country so proud, Rory McIlroy continuing to dominate the world of golf, thrilling All-Ireland Hurling and Football Championships, Leinster’s Rugby team winning a third European Cup and Ireland’s return to a major football championships at Euro 2012, crowned by their superb supporters.

Ireland’s Cricketers are now at a fifth World Cup since their début appearance in the Caribbean back in 2007 and they are looking to crown a superb year for Irish Sport. This time it is the Twenty20 version, with the ICC World Twenty 20 being played on the beautiful island of Sri Lanka.

Ireland must win at least One of these matches to get through to the ‘Super 8’ stage of the tournament with Two teams advancing to this stage from the three teams in the group.

Ireland’s preparations have gone very well in Sri Lanka and they remain unbeaten so far having won all four of their warm-up matches, including wins over Test Nations Zimbabwe and Bangladesh.

How to get behind Ireland

We are encouraging all Ireland fans to get behind the team from Ireland and all around the world. On our Facebook or Twitter page or even by email to info@irishcricket.org Send us on a photo of how you will be supporting the Boys in Green in the coming weeks. The more green clothing and cricket paraphernalia the better!

The fan that captures the spirit of Ireland’s ‘Blarney Army’ the best will win a cricket bat signed by both Ireland and Australia from this summer’s RSA Challenge.

If you are in Dublin and you want to join some Irish cricket fans for the matches, there will be a special showing of the games at the Russell Court Hotel in Krystle for all of Ireland’s matches. On Wednesday the 19th, it will be open from 10am and serving Lunch during the match and on Monday the 24th, it will be serving lunch throughout the match. ALL are welcome.