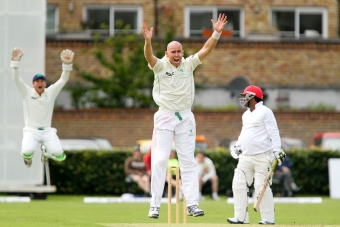 Cricket finally got going at Rathmines at the third time of asking with Ireland dominating the 62.1 overs that were possible today and Ireland will take a lead of 42 into the final day tomorrow.

Afghanistan were bowled all out for 84 inside 30 overs within one session, mainly thanks to 4 wickets each for Alex Cusack and Max Sorensen. Arguably the best bowling of the lot was from Trent Johnston however, who bowled a wonderful opening spell of 8 overs for just 7 runs which featured 2 wickets and 4 maidens. It set the tone for the day and Ireland helped set up Ireland gain the 6 points for the first innings lead before the end of the first day.

There may even be the chance to push on for a full victory tomorrow and as long as the weather stays dry as Ireland’s opening partnership of Andrew Balbirnie and Paul Stirling put on 49 together before the loss of Balbirnie. This was followed up by a unbroken partnership of 61 between Cusack and Wilson following the fall of Stirling for an entertaining 42. Alex Cusack in particular should be very satisfied with a great days work as added to his 4 wickets he ended the day on 34 not out.

Full scorecard from the day is Here